All Six Planets Known to Orbit Kepler-11 Have Low Densities

The Kepler-11 planetary system contains six transiting planets ranging in size from 1.8 to 4.2 times the radius of Earth. Five of these planets orbit in a tightly packed configuration with periods between 10 and 47 days. We perform a dynamical analysis of the system based upon transit timing variations observed in more than three years of Kepler photometric data. Stellar parameters are derived using a combination of spectral classification and constraints on the star's density derived from transit profiles together with planetary eccentricity vectors provided by our dynamical study. Combining masses of the planets relative to the star from our dynamical study and radii of the planets relative to the star from transit depths together with deduced stellar properties yields measurements of the radii of all six planets, masses of the five inner planets, and an upper bound to the mass of the outermost planet, whose orbital period is 118 days. We find mass-radius combinations for all six planets that imply that substantial fractions of their volumes are occupied by constituents that are less dense than rock. Moreover, we examine the stability of these envelopes against photoevaporation and find that the compositions of at least the inner two planets have likely been significantly sculpted by mass loss. The Kepler-11 system contains the lowest mass exoplanets for which both mass and radius have been measured. 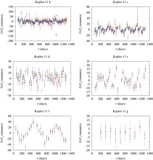