The multiple-planet systems discovered by the Kepler mission exhibit the following feature: planet pairs near first-order mean-motion resonances prefer orbits just outside the nominal resonance, while avoiding those just inside the resonance. We explore an extremely simple dynamical model for planet formation, in which planets grow in mass at a prescribed rate without orbital migration or dissipation. We develop an analytic version of this model for two-planet systems in two limiting cases: the planet mass grows quickly or slowly relative to the characteristic resonant libration time. In both cases, the distribution of systems in period ratio develops a characteristic asymmetric peak-trough structure around the resonance, qualitatively similar to that observed in the Kepler sample. We verify this result with numerical integrations of the three-body problem. We show that for the 3 : 2 resonance, where the observed peak-trough structure is strongest, our simple model is consistent with the observations for a range of mean planet masses 20-100 M ⊕. This predicted mass range is higher—by at least a factor of three—than the range expected from the few Kepler planets with measured masses, but part of this discrepancy could be due to oversimplifications in the dynamical model or uncertainties in the planetary mass-radius relation. 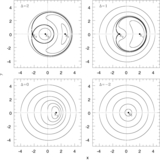