Segue 2, discovered by Belokurov et al., is a galaxy with a luminosity of only 900 L ⊙. We present Keck/DEIMOS spectroscopy of 25 members of Segue 2—a threefold increase in spectroscopic sample size. The velocity dispersion is too small to be measured with our data. The upper limit with 90% (95%) confidence is σ v < 2.2 (2.6) km s-1, the most stringent limit for any galaxy. The corresponding limit on the mass within the three-dimensional half-light radius (46 pc) is M 1/2 < 1.5 (2.1) × 105 M ⊙. Segue 2 is the least massive galaxy known. We identify Segue 2 as a galaxy rather than a star cluster based on the wide dispersion in [Fe/H] (from -2.85 to -1.33) among the member stars. The stars' [α/Fe] ratios decline with increasing [Fe/H], indicating that Segue 2 retained Type Ia supernova ejecta despite its presently small mass and that star formation lasted for at least 100 Myr. The mean metallicity, lang[Fe/H]rang = -2.22 ± 0.13 (about the same as the Ursa Minor galaxy, 330 times more luminous than Segue 2), is higher than expected from the luminosity-metallicity relation defined by more luminous dwarf galaxy satellites of the Milky Way. Segue 2 may be the barest remnant of a tidally stripped, Ursa Minor-sized galaxy. If so, it is the best example of an ultra-faint dwarf galaxy that came to be ultra-faint through tidal stripping. Alternatively, Segue 2 could have been born in a very low mass dark matter subhalo (v max < 10 km s-1), below the atomic hydrogen cooling limit.

The data presented herein were obtained at the W. M. Keck Observatory, which is operated as a scientific partnership among the California Institute of Technology, the University of California and the National Aeronautics and Space Administration. The Observatory was made possible by the generous financial support of the W. M. Keck Foundation. 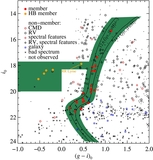