We present the measured Sunyaev-Zel'dovich (SZ) flux from 474 optically selected MaxBCG clusters that fall within the Atacama Cosmology Telescope (ACT) Equatorial survey region. The ACT Equatorial region used in this analysis covers 510 deg2 and overlaps Stripe 82 of the Sloan Digital Sky Survey. We also present the measured SZ flux stacked on 52 X-ray-selected MCXC clusters that fall within the ACT Equatorial region and an ACT Southern survey region covering 455 deg2. We find that the measured SZ flux from the X-ray-selected clusters is consistent with expectations. However, we find that the measured SZ flux from the optically selected clusters is both significantly lower than expectations and lower than the recovered SZ flux measured by the Planck satellite. Since we find a lower recovered SZ signal than Planck, we investigate the possibility that there is a significant offset between the optically selected brightest cluster galaxies (BCGs) and the SZ centers, to which ACT is more sensitive due to its finer resolution. Such offsets can arise due to either an intrinsic physical separation between the BCG and the center of the gas concentration or from misidentification of the cluster BCG. We find that the entire discrepancy for both ACT and Planck can be explained by assuming that the BCGs are offset from the SZ maxima with a uniform random distribution between 0 and 1.5 Mpc. Such large offsets between gas peaks and BCGs for optically selected cluster samples seem unlikely given that we find the physical separation between BCGs and X-ray peaks for an X-ray-selected subsample of MaxBCG clusters to have a much narrower distribution that peaks within 0.2 Mpc. It is possible that other effects are lowering the ACT and Planck signals by the same amount, with offsets between BCGs and SZ peaks explaining the remaining difference between ACT and Planck measurements. Several effects that can lower the SZ signal equally for both ACT and Planck, but not explain the difference in measured signals, include a larger percentage of false detections in the MaxBCG sample, a lower normalization of the mass-richness relation, radio or infrared galaxy contamination of the SZ flux, and a low intrinsic SZ signal. In the latter two cases, the effects would need to be preferentially more significant in the optically selected MaxBCG sample than in the MCXC X-ray sample. 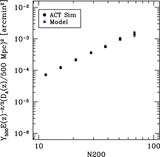