We have used data obtained with the Fine Guidance Sensors on the Hubble Space Telescope to derive precise astrometric parallaxes for four classical novae: V603 Aql, DQ Her, GK Per, and RR Pic. All four objects exceeded the Eddington limit at visual maximum. Re-examination of the original light curve data for V603 Aql and GK Per has led us to conclude that their visual maxima were slightly brighter than commonly assumed. With known distances, we examine the various maximum magnitude-rate of decline relationships that have been established for classical novae. We find that these four objects show a similar level of scatter about these relationships as seen in larger samples of novae whose distances were determined using indirect techniques. We also examine the nebular expansion parallax method and find that it fails for three of the four objects. In each case it was possible to find an explanation for the failure of that technique to give precise distance estimates. DQ Her appears to suffer from an anomalously high extinction when compared to field stars on its sight line. We suggest that this is likely due to local material, which may also be the source of the IRAS detections of this object. 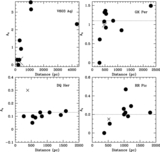