We present the results of a search for high proper motion white dwarfs in the deep survey of the Canada-France-Hawaii Telescope Legacy Survey (CFHTLS). The CFHTLS Deep Survey covers 4 deg2 in five filters (u*, g', r', i', and z'). For the first and the fourth fields, we use data for a 5 year baseline from 2004 to 2009. For the second and the third fields, we have a 4 year baseline from 2004 to 2008. Proper motion selection is used to distinguish cool high-velocity white dwarfs from distant objects with similar blue colors such as compact faint galaxies and quasars. We discovered 44 white dwarf candidates brighter than g' = 24 on the basis of their spectral energy distribution and reduced proper motions. We found one white dwarf candidate with effective temperature less than 4000 K. From its estimated tangential velocity of 31 km s-1 and a distance of 124 pc, it appears to be located in the thin or thick disk of the Galaxy. We also find five candidates having T eff between 4000 K and 5000 K. One candidate in D2 with effective temperature of 5000 K and tangential velocity of 190 km s-1 indicates that it could be in the thick disk or in the halo. The other four candidates are likely located in the thin disk because of their estimated distances and tangential velocity. 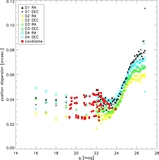