On the Origin of Mass Segregation in NGC 3603

We present deep Hubble Space Telescope/Wide Field and Planetary Camera 2 photometry of the young HD 97950 star cluster in the giant H II region NGC 3603. The data were obtained in 1997 and 2007 permitting us to derive membership based on proper motions of the stars. Our data are consistent with an age of 1 Myr for the HD 97950 cluster. A possible age spread, if present in the cluster, appears to be small. The global slope of the incompleteness-corrected mass function for member stars within 60'' is Γ = -0.88 ± 0.15, which is flatter than the value of a Salpeter slope of -1.35. The radially varying mass function shows pronounced mass segregation ranging from slopes of -0.26 ± 0.32 in the inner 5'' to -0.94 ± 0.36 in the outermost annulus (40''-60''). Stars more massive than 50 M ⊙ are found only in the cluster center. The Λ minimum spanning tree technique confirms significant mass segregation down to 30 M ⊙. The dependence of Λ on mass, i.e., that high-mass stars are more segregated than low-mass stars, and the (weak) dependence of the velocity dispersion on stellar mass might imply that the mass segregation is dynamical in origin. While primordial segregation cannot be excluded, the properties of the mass segregation indicate that dynamical mass segregation may have been the dominant process for segregation of high-mass stars. 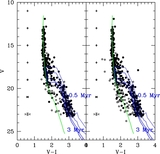