Deeper by the Dozen: Understanding the Cross-field Temperature Distributions of Coronal Loops

Spectroscopic analysis of coronal loops has revealed a variety of cross-field temperature distributions. Some loops appear to be isothermal while others require multithermal plasma. The EUV Imaging Spectrometer on Hinode has the spatial resolution and temperature coverage required for differential emission measure (DEM) analysis of coronal loops. Our results also use data from the X-Ray Telescope on Hinode as a high-temperature constraint. Of our 12 loops, two were post-flare loops with broad temperature distributions, two were narrow but not quite isothermal, and the remaining eight were in the mid range. We consider our DEM methods to be a significant advance over previous work, and it is also reassuring to learn that our findings are consistent with results available in the literature. For the quiescent loops analyzed here, 10 MK plasma, a signature of nanoflares, appears to be absent at a level of approximately two orders of magnitude down from the DEM peak. We find some evidence that warmer loops require broader DEMs. The cross-field temperatures obtained here cannot be modeled as single flux tubes. Rather, the observed loop must be composed of several or many unresolved strands. The plasma contained in each of these strands could be cooling at different rates, contributing to the multithermal nature of the observed loop pixels. An important implication of our DEM results involves observations from future instruments. Once solar telescopes can truly resolve X-ray and EUV coronal structures, these images would have to reveal the loop substructure implied by our multithermal results. 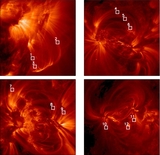