We present a new measurement of the stellar initial mass function (IMF) based on ultra-deep, high-resolution photometry of >5000 stars in the outskirts of the Small Magellanic Cloud (SMC) galaxy. The Hubble Space Telescope (HST) Advanced Camera for Surveys observations reveal this rich, cospatial population behind the foreground globular cluster 47 Tuc, which we targeted for 121 HST orbits. The stellar main sequence of the SMC is measured in the F606W, F814W color-magnitude diagram down to ~30th magnitude, and is cleanly separated from the foreground star cluster population using proper motions. We simulate the SMC population by extracting stellar masses (single and unresolved binaries) from specific IMFs and converting those masses to luminosities in our bandpasses. The corresponding photometry for these simulated stars is drawn directly from a rich cloud of 4 million artificial stars, thereby accounting for the real photometric scatter and completeness of the data. Over a continuous and well-populated mass range of M = 0.37-0.93 M ⊙ (e.g., down to a ~75% completeness limit at F606W = 28.7), we demonstrate that the IMF is well represented by a single power-law form with slope α = -1.90 (+0.15 -0.10) (3σ error) (e.g., dN/dMvprop M α). This is shallower than the Salpeter slope of α = -2.35, which agrees with the observed stellar luminosity function at higher masses. Our results indicate that the IMF does not turn over to a more shallow power-law form within this mass range. We discuss implications of this result for the theory of star formation, the inferred masses of galaxies, and the (lack of a) variation of the IMF with metallicity.

Based on observations with the NASA/ESA Hubble Space Telescope, obtained at the Space Telescope Science Institute, which is operated by the Association of Universities for Research in Astronomy, Inc., under NASA contract NAS5-26555. These observations are associated with proposal GO-11677. 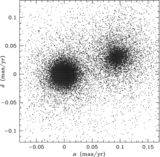