HESS J1943+213, a TeV point source close to the Galactic plane recently discovered by the H.E.S.S. Collaboration, was proposed to be an extreme BL Lacertae object, though a pulsar wind nebula (PWN) nature could not be completely discarded. To investigate its nature, we performed high-resolution radio observations with the European Very Long Baseline Interferometry Network (EVN) and reanalyzed archival continuum and H I data. The EVN observations revealed a compact radio counterpart of the TeV source. The low brightness temperature and the resolved nature of the radio source are indications against the beamed BL Lacertae hypothesis. The radio/X-ray source appears immersed in a ~1' elliptical feature, suggesting a possible galactic origin (PWN nature) for the HESS source. We found that HESS J1943+213 is located in the interior of a ~1° diameter H I feature and explored the possibility of them being physically related. 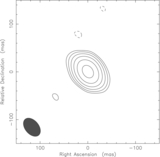