Leo P is a low-luminosity dwarf galaxy discovered through the blind H I Arecibo Legacy Fast ALFA survey. The H I and follow-up optical observations have shown that Leo P is a gas-rich dwarf galaxy with both active star formation and an underlying older population, as well as an extremely low oxygen abundance. Here, we measure the distance to Leo P by applying the tip of the red giant branch (TRGB) distance method to photometry of the resolved stellar population from new Large Binocular Telescope V and I band imaging. We measure a distance modulus of 26.19^{+0.17}_{-0.50} mag corresponding to a distance of 1.72^{+0.14}_{-0.40} Mpc. Although our photometry reaches 3 mag below the TRGB, the sparseness of the red giant branch yields higher uncertainties on the lower limit of the distance. Leo P is outside the Local Group with a distance and velocity consistent with the local Hubble flow. While located in a very low-density environment, Leo P lies within ~0.5 Mpc of a loose association of dwarf galaxies which include NGC 3109, Antlia, Sextans A, and Sextans B, and 1.1 Mpc away from its next nearest neighbor, Leo A. Leo P is one of the lowest metallicity star-forming galaxies known in the nearby universe, comparable in metallicity to I Zw 18 and DDO 68, but with stellar characteristics similar to dwarf spheriodals (dSphs) in the Local Volume such as Carina, Sextans, and Leo II. Given its physical properties and isolation, Leo P may provide an evolutionary link between gas-rich dwarf irregular galaxies and dSphs that have fallen into a Local Group environment and been stripped of their gas. 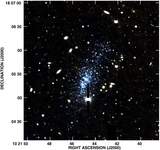