The Solar Neighborhood XXIX: The Habitable Real Estate of Our Nearest Stellar Neighbors

We use the sample of known stars and brown dwarfs within 5 pc of the Sun, supplemented with AFGK stars within 10 pc, to determine which stellar spectral types provide the most habitable real estate—defined as locations where liquid water could be present on Earth-like planets. Stellar temperatures and radii are determined by fitting model spectra to spatially resolved broadband photometric energy distributions for stars in the sample. Using these values, the locations of the habitable zones are calculated using an empirical formula for planetary surface temperature and assuming the condition of liquid water, called here the empirical habitable zone (EHZ). Systems that have dynamically disruptive companions are considered not habitable. We consider companions to be disruptive if the separation ratio of the companion to the habitable zone is less than 5:1. We use the results of these calculations to derive a simple formula for predicting the location of the EHZ for main sequence stars based on V - K color. We consider EHZ widths as more useful measures of the habitable real estate around stars than areas because multiple planets are not expected to orbit stars at identical stellar distances. This EHZ provides a qualitative guide on where to expect the largest population of planets in the habitable zones of main sequence stars. Because of their large numbers and lower frequency of short-period companions, M stars provide more EHZ real estate than other spectral types, possessing 36.5% of the habitable real estate en masse. K stars are second with 21.5%, while A, F, and G stars offer 18.5%, 6.9%, and 16.6%, respectively. Our calculations show that three M dwarfs within 10 pc harbor planets in their EHZs—GJ 581 may have two planets (d with msin i = 6.1 M ⊕ g with msin i = 3.1 M ⊕), GJ 667 C has one (c with msin i = 4.5 M ⊕), and GJ 876 has two (b with msin i = 1.89 M Jup and c with msin i = 0.56 M Jup). If Earth-like planets are as common around low-mass stars as recent Kepler results suggest, M stars will harbor more Earth-like planets in habitable zones than any other stellar spectral type. 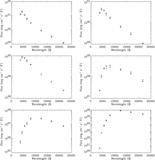