Salts and Radiation Products on the Surface of Europa

The surface of Europa could contain the compositional imprint of an underlying interior ocean, but competing hypotheses differ over whether spectral observations from the Galileo spacecraft show the signature of ocean evaporates or simply surface radiation products unrelated to the interior. Using adaptive optics at the W. M. Keck Observatory, we have obtained spatially resolved spectra of most of the disk of Europa at a spectral resolution ̃40 times higher than seen by the Galileo spacecraft. These spectra show a previously undetected distinct signature of magnesium sulfate salts on Europa, but the magnesium sulfate is confined to the trailing hemisphere and spatially correlated with the presence of radiation products like sulfuric acid and SO2. On the leading, less irradiated, hemisphere, our observations rule out the presence of many of the proposed sulfate salts, but do show the presence of distorted water ice bands. Based on the association of the potential MgSO4 detection on the trailing side with other radiation products, we conclude that MgSO4 is also a radiation product, rather than a constituent of a Europa ocean brine. Based on ocean chemistry models, we hypothesize that, prior to irradiation, magnesium is primarily in the form of MgCl2, and we predict that NaCl and KCl are even more abundant, and, in fact, dominate the non-ice component of the leading hemisphere. We propose observational tests of this new hypothesis. 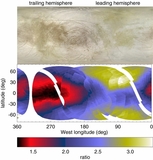