The Return of the Andromedids Meteor Shower

The Andromedid meteor shower underwent spectacular outbursts in 1872 and 1885, producing thousands of visual meteors per hour and described as "stars fell like rain" in Chinese records of the time. The shower originates from comet 3D/Biela whose disintegration in the mid-1800's is linked to the outbursts, but the shower has been weak or absent since the late 19th century. This shower returned in 2011 December with a zenithal hourly rate of approximately 50, the strongest return in over a hundred years. Some 122 probable Andromedid orbits were detected by the Canadian Meteor Orbit Radar while one possible brighter Andromedid member was detected by the Southern Ontario Meteor Network and several single station possible Andromedids by the Canadian Automated Meteor Observatory. The shower outburst occurred during 2011 December 3-5. The radiant at R.A. +18° and decl. +56° is typical of the "classical" Andromedids of the early 1800s, whose radiant was actually in Cassiopeia. Numerical simulations of the shower were necessary to identify it with the Andromedids, as the observed radiant differs markedly from the current radiant associated with that shower. The shower's orbital elements indicate that the material involved was released before 3D/Biela's breakup prior to 1846. The observed shower in 2011 had a slow geocentric speed (VG = 16 km s-1) and was comprised of small particles: the mean measured mass from the radar is ~5 × 10-7 kg, corresponding to radii of 0.5 mm at a bulk density of 1000 kg m-3. Numerical simulations of the parent comet indicate that the meteoroids of the 2011 return of the Andromedids shower were primarily ejected during 3D/Biela's 1649 perihelion passage. The orbital characteristics, radiant, and timing as well as the absence of large particles in the streamlet are all broadly consistent with simulations. However, simulations of the 1649 perihelion passage necessitate going back five Lyapunov times (which is only 25 yr for the highly perturbed parent). As a result, the stream evolution is somewhat uncertain and some discrepancy with the observations is to be expected: the radiant is 8° off, the inclination 3° higher, and the peak of the shower occurs a day earlier than predicted. Predictions are made regarding other appearances of the shower in the years 2000-2047 based on our numerical model. We note that the details of the 2011 return can, in principle, be used to better constrain the orbit of 3D/Biela prior to the comets first recorded return in 1772 and we address this issue briefly as well. 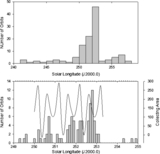