Aims: FIRST is a prototype instrument built to demonstrate the capabilities of the pupil remapping technique, using single-mode fibers and working at visible wavelengths. Our immediate objective is to demonstrate the high angular resolution capability of the instrument and to show that the spectral resolution of the instrument enables characterization of stellar companions.
Methods: The FIRST-18 instrument is an improved version of FIRST-9 that simultaneously recombines two sets of nine fibers instead of one, thus greatly enhancing the (u, v) plane coverage. We report on observations of the binary system Capella at three epochs over a period of 14 months (≳4 orbital periods) with FIRST-18 mounted on the 3 m Shane telescope at Lick Observatory. The binary separation during our observations ranges from 0.8 to 1.2 times the diffraction limit of the telescope at the central wavelength of the spectral band.
Results: We successfully resolved the Capella binary system at all epochs, with an astrometric precision as good as 1 mas under the best observing conditions. FIRST also gives access to the spectral flux ratio between the two components directly measured with an unprecedented spectral resolution of R ~ 300 over the 600-850 nm range. In particular, our data allow detection of the well-known overall slope of the flux ratio spectrum, leading to an estimation of the "pivot" wavelength of 0.64 ± 0.01 μm, at which the cooler component becomes the brightest. Spectral features arising from the difference in effective temperature of the two components (specifically the Hα line, TiO, and CN bands) have been used to constrain the stellar parameters. The effective temperatures we derive for both components are slightly lower (5-7%) than the well-established properties for this system. This difference mainly comes from deeper molecular features than those predicted by state-of-the-art stellar atmospheric models, suggesting that molecular line lists used in the photospheric models are incomplete and/or oscillator strengths are underestimated, most likely concerning the CN molecule.
Conclusions: These results demonstrate the power of FIRST, which is a fibered pupil remapping-based instrument, in terms of high angular resolution and show that the direct measurement of the spectral flux ratio provides valuable information to characterize little known companions. 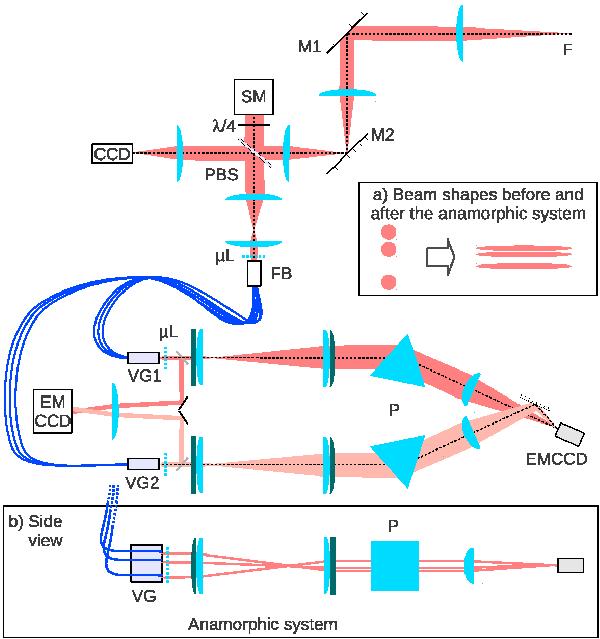