We present VIsible Multi-Object Spectrograph (VIMOS) observations of a galaxy quintuply imaged by the Frontier Fields galaxy cluster RXC J2248.7-4431 . This sub-, high- galaxy has been recently discovered by Monna et al. (2013) using dropout techniques with the 16-band HST photometry acquired as part of the Cluster Lensing And Supernova survey with Hubble (CLASH). Obtained as part of the CLASH-VLT survey, the VIMOS medium-resolution spectra of this source show a very faint continuum between 8700 Å and 9300 Å and a prominent emission line at 8643 , which can be readily identified with Lyman- at . The emission line exhibits an asymmetric profile, with a more pronounced red wing. The rest-frame equivalent width of the line is , relatively well constrained thanks to the detection of the UV continuum, which is rarely achieved for a sub- galaxy at this redshift. After correcting formagnification, the star formation rate (SFR) estimated from the Ly line is SFRLyyr and that estimated from the UV data is SFRUVyr. We estimate that the effective radius of the source is kpc, which implies a star formation surface mass density yrkpc and, using the Kennicutt-Schmidt relation, a gas surface mass density pc. Our results support the idea that this magnified, distant galaxy is a young and compact object with luminosity at , when the Universe was just 1 Gyr old, with a similar amount of mass in gas and stars. In the spirit of the Frontier Fields initiative, we also publish the redshifts of several multiply imaged sources and other background objects, which will help improving the strong-lensing model of this galaxy cluster. 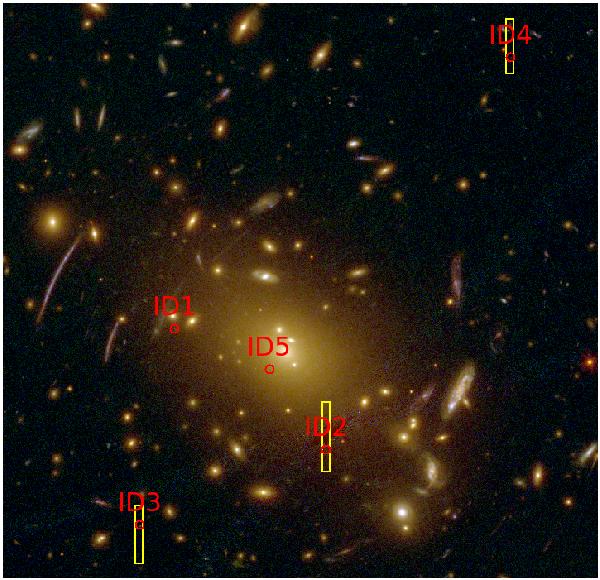