Context. We present the revised near- to mid-infrared catalogue of the AKARI North Ecliptic Pole deep survey. The survey has the unique advantage of continuous filter coverage from 2 to 24 μm over nine photometric bands, but the initial version of the survey catalogue leaves room for improvement in the image analysis stage; the original images are strongly contaminated by the behaviour of the detector and the optical system.
Aims: The purpose of this study is to devise new image analysis methods and to improve the detection limit and reliability of the source extraction.
Methods: We removed the scattered light and stray light from the Earth limb, and corrected for artificial patterns in the images by creating appropriate templates. We also removed any artificial sources due to bright sources by using their properties or masked them out visually. In addition, for the mid-infrared source extraction, we created detection images by stacking all six bands. This reduced the sky noise and enabled us to detect fainter sources more reliably. For the near-infrared source catalogue, we considered only objects with counterparts from ground-based catalogues to avoid fake sources. For our ground-based catalogues, we used catalogues based on the CFHT/MegaCam z' band, CFHT/WIRCam Ks band and Subaru/Scam z' band. Objects with multiple counterparts were all listed in the catalogue with a merged flag for the AKARI flux.
Results: The detection limits of all mid-infrared bands were improved by ~20%, and the total number of detected objects was increased by ~2000 compared with the previous version of the catalogue; it now has 9560 objects. The 5σ detection limits in our catalogue are 11, 9, 10, 30, 34, 57, 87, 93, and 256 μJy in the N2, N3, N4, S7, S9W, S11, L15, L18W, and L24 bands, respectively. The astrometric accuracies of these band detections are 0.48, 0.52, 0.55, 0.99, 0.95, 1.1, 1.2, 1.3, and 1.6 arcsec, respectively. The false-detection rate of all nine bands was decreased to less than 0.3%. In total, 27 770 objects are listed in the catalogue, 11 349 of which have mid-infrared fluxes. 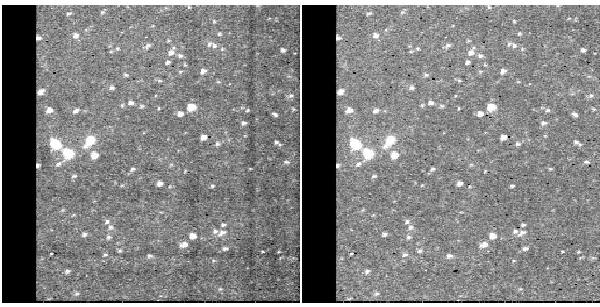