The O3N2 and N2 abundance indicators revisited: improved calibrations based on CALIFA and Te-based literature data

The use of integral field spectroscopy is since recently allowing to measure the emission line fluxes of an increasingly large number of star-forming galaxies, both locally and at high redshift. Many studies have used these fluxes to derive the gas-phase metallicity of the galaxies by applying the so-called strong-line methods. However, the metallicity indicators that these datasets use were empirically calibrated using few direct abundance data points (Te-based measurements). Furthermore, a precise determination of the prediction intervals of these indicators is commonly lacking in these calibrations. Such limitations might lead to systematic errors in determining the gas-phase metallicity, especially at high redshift, which might have a strong impact on our understanding of the chemical evolution of the Universe. The main goal of this study is to review the most widely used empirical oxygen calibrations, O3N2 and N2, by using newdirect abundance measurements. We pay special attention to (1) the expected uncertainty of these calibrations as a function of the index value or abundance derived and (2) the presence of possible systematic offsets. This is possible thanks to the analysis of the most ambitious compilation of Te-based H ii regions to date. This new dataset compiles the Te-based abundances of 603 H ii regions extracted from the literature but also includes new measurements from the CALIFA survey. Besides providing new and improved empirical calibrations for the gas abundance, we also present a comparison between our revisited calibrations with a total of 3423 additional CALIFA H ii complexes with abundances derived using the ONS calibration from the literature. The combined analysis of Te-based and ONS abundances allows us to derive their most accurate calibration to date for both the O3N2 and N2 single-ratio indicators, in terms of all statistical significance, quality, and coverage of the parameters space. In particular, we infer that these indicators show shallower abundance dependencies and statistically significant offsets compared to others'. The O3N2 and N2 indicators can be empirically applied to derive oxygen abundances calibrations from either direct abundance determinations with random errors of 0.18 and 0.16, respectively, or from indirect ones (but based on a large amount of data), reaching an average precision of 0.08 and 0.09 dex (random) and 0.02 and 0.08 dex (systematic; compared to the direct estimations), respectively.

The compiled catalog is only available at the CDS via anonymous ftp to http://cdsarc.u-strasbg.fr (ftp://130.79.128.5) or via http://cdsarc.u-strasbg.fr/viz-bin/qcat?J/A+A/559/A114Based on observations collected at the German-Spanish Astronomical Center, Calar Alto, jointly operated by the Max-Planck-Institut für Astronomie Heidelberg and the Instituto de Astrofísica de Andalucía (CSIC). 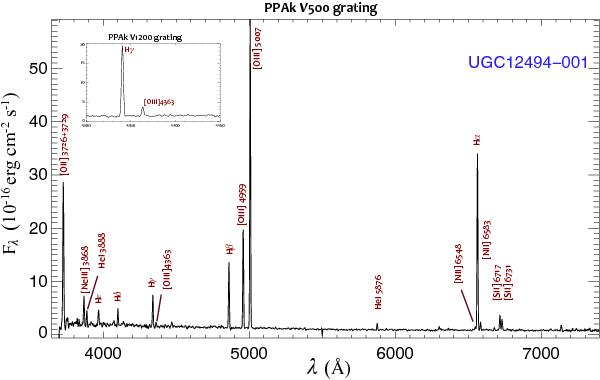