On the nature of WO stars: a quantitative analysis of the WO3 star DR1 in IC 1613

Context. Oxygen sequence Wolf-Rayet (WO) stars are thought to represent the final evolutionary stage of the most massive stars. The characteristic strong O vi emission possibly originates from an enhanced oxygen abundance in the stellar wind. Alternatively, the O vi emission can be caused by the high temperature of these stars, in which case the WO stars are the high-temperature extension of the more common carbon sequence Wolf-Rayet (WC) stars.
Aims: By constraining the physical properties and evolutionary status of DR1, a WO star in the low-metallicity Local Group dwarf galaxy IC 1613 and one of only two objects of its class known in a SMC-like metallicity environment, we aim to investigate the nature of WO stars and their evolutionary connection with WC stars.
Methods: We use the non-local thermodynamic equilibrium atmosphere code cmfgen to model the observed spectrum of DR1 and to derive its stellar and wind parameters. We compare our values with other studies of WC and WO stars, as well as with the predictions of evolutionary models. We also model the surrounding nebula using the photo-ionization code cloudy.
Results: The oxygen and carbon abundances that we obtain are comparable to values found for WC stars. The temperature and luminosity are, however, higher than those of WC stars. DR1 is embedded in the hottest known H ii region in the Local Group. The nebular properties can be consistently reproduced by cloudy models adopting DR1 as central ionizing source.
Conclusions: Comparison of the abundances and temperature of DR1 with core helium-burning models show that DR1 is currently well into the second half of helium burning. If the properties of DR1 are representative for the WO class, it would imply that WO stars are the high-temperature and high-luminosity extension of the WC stars, and do not necessarily represent a later evolutionary stage.

Based on observations obtained at the European Southern Observatory under GTO program 088.D-0181. 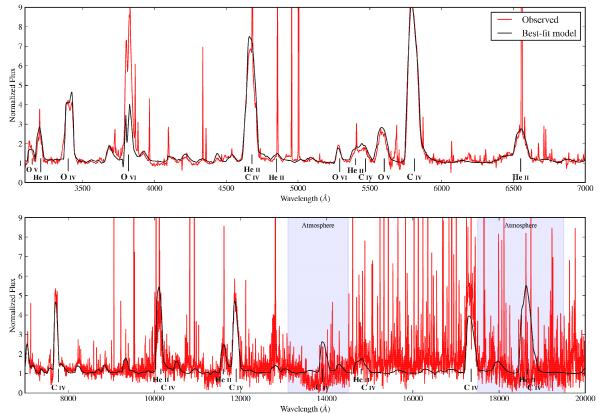