A diversity of dusty AGN tori. Data release for the VLTI/MIDI AGN Large Program and first results for 23 galaxies

Context. The AGN-heated dust distribution (the "torus") is increasingly recognized not only as the absorber required in unifying models, but as a tracer for the reservoir that feeds the nuclear super-massive black hole. Yet, even its most basic structural properties (such as its extent, geometry and elongation) are unknown for all but a few archetypal objects.
Aims: In order to understand how the properties of AGN tori are related to feeding and obscuration, we need to resolve the matter distribution on parsec scales.
Methods: Since most AGNs are unresolved in the mid-IR, even with the largest telescopes, we utilize the MID-infrared interferometric Instrument (MIDI) at the Very Large Telescope Interferometer (VLTI) that is sensitive to structures as small as a few milli-arcseconds (mas). We present here an extensive amount of new interferometric observations from the MIDI AGN Large Program (2009-2011) and add data from the archive to give a complete view of the existing MIDI observations of AGNs. Additionally, we have obtained high-quality mid-IR spectra from VLT/VISIR to provide a precise total flux reference for the interferometric data.
Results: We present correlated and total fluxes for 23 AGNs (16 of which with new data) and derive flux and size estimates at 12 μm using simple axisymmetric geometrical models. Perhaps the most surprising result is the relatively high level of unresolved flux and its large scatter: The median "point source fraction" is 70% for type 1 and 47 % for type 2 AGNs meaning that a large part of the flux is concentrated on scales <5 mas (0.1-10 pc). Among sources observed with similar spatial resolution, it varies from 20%-100%. For 18 of the sources, two nuclear components can be distinguished in the radial fits. While these models provide good fits to all but the brightest sources, significant elongations are detected in eight sources.
Conclusions: The half-light radii of the fainter sources are smaller than expected from the size ∝L0.5 scaling of the bright sources and show a large scatter, especially when compared to the relatively tight size-luminosity relation in the near-infrared. It is likely that a common "size-luminosity" relation does not exist for AGN tori, but that they are dominated by intrinsic differences in their dust structures. Variations in the relative contribution of extended dust in the narrow line region or heated by star formation vs. compact AGN-heated dust and non-thermal emission also have to be taken into account. 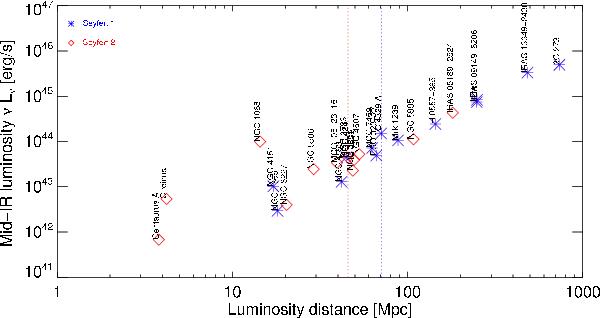