Aims: We study the impact of a subsolar metallicity on various properties of non-rotating and rotating stars, such as surface velocities and abundances, lifetimes, evolutionary tracks, and evolutionary scenarios.
Methods: We provide a grid of single star models covering a mass range of 0.8 to 120 M☉ with an initial metallicity Z = 0.002 with and without rotation. We discuss the impact of a change in the metallicity by comparing the current tracks with models computed with exactly the same physical ingredients but with a metallicity Z = 0.014 (solar).
Results: We show that the width of the main-sequence (MS) band in the upper part of the Hertzsprung-Russell diagram (HRD), for luminosity above log (L/L☉) > 5.5, is very sensitive to rotational mixing. Strong mixing significantly reduces the MS width. Here for the first time over the whole mass range, we confirm that surface enrichments are stronger at low metallicity provided that comparisons are made for equivalent initial mass, rotation, and evolutionary stage. We show that the enhancement factor due to a lowering of the metallicity (all other factors kept constant) increases when the initial mass decreases. Present models predict an upper luminosity for the red supergiants (RSG) of log (L/L☉) around 5.5 at Z = 0.002 in agreement with the observed upper limit of RSG in the Small Magellanic Cloud. We show that models using shear diffusion coefficient, which is calibrated to reproduce the surface enrichments observed for MS B-type stars at Z = 0.014, can also reproduce the stronger enrichments observed at low metallicity. In the framework of the present models, we discuss the factors governing the timescale of the first crossing of the Hertzsprung gap after the MS phase. We show that any process favouring a deep localisation of the H-burning shell (steep gradient at the border of the H-burning convective core, low CNO content), and/or the low opacity of the H-rich envelope favour a blue position in the HRD for the whole, or at least a significant fraction, of the core He-burning phase. 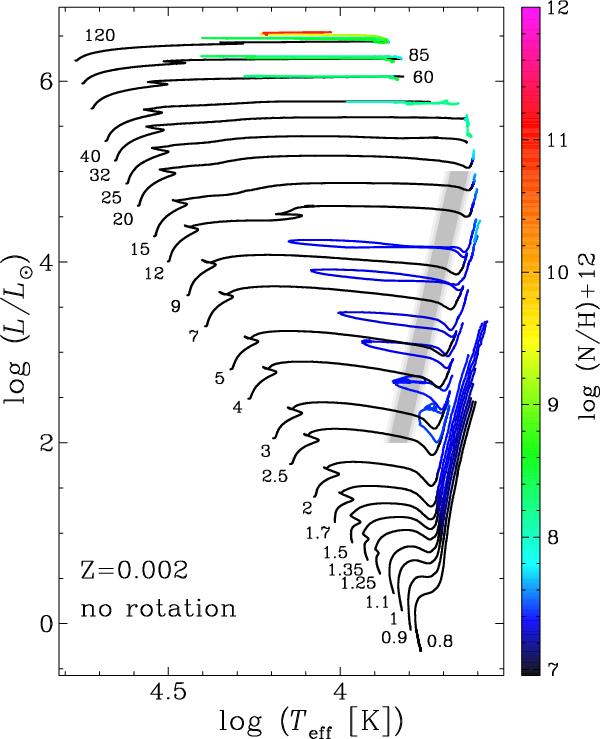