Dust, ice and gas in time (DIGIT): Herschel and Spitzer spectro-imaging of SMM3 and SMM4 in Serpens

Context. Mid- and far-infrared observations of the environment around embedded protostars reveal a plethora of high excitation molecular and atomic emission lines. Different mechanisms for the origin of these lines have been proposed, including shocks induced by protostellar jets and radiation or heating by the embedded protostar of its immediate surroundings.
Aims: By studying of the most important molecular and atomic coolants, we aim at constraining the physical conditions around the embedded protostars SMM3 and SMM4 in the Serpens molecular cloud core and measuring the CO/H2 ratio in warm gas.
Methods: Spectro-imaging observations from the Spitzer Infrared Spectrograph (IRS) and the Herschel Photodetector Array Camera and Spectrometer (PACS) provide an almost complete wavelength coverage between 5 and 200 μm. Within this range, emission from all major molecular (H2, CO, H2O and OH) and many atomic ([OI], [CII], [FeII], [SiII] and [SI]) coolants of excited gas are detected. Emission line maps reveal the morphology of the observed emission and indicate associations between the different species. The excitation conditions for molecular species are assessed through rotational diagrams. Emission lines from major coolants are compared to the results of steady-state C- and J-type shock models.
Results: Line emission tends to peak at distances of ~10-20″ from the protostellar sources with all but [CII] peaking at the positions of outflow shocks seen in near-IR and sub-millimeter interferometric observations. The [CII] emission pattern suggests that it is most likely excited from energetic UV radiation originating from the nearby flat-spectrum source SMM6. Excitation analysis indicates that H2 and CO originate in gas at two distinct rotational temperatures of ~300 K and 1000 K, while the excitation temperature for H2O and OH is ~100-200 K. The morphological and physical association between CO and H2 suggests a common excitation mechanism, which allows direct comparisons between the two molecules. The CO/H2 abundance ratio varies from ~10-5 in the warmer gas up to ~10-4 in the hotter regions. Shock models indicate that C-shocks can account for the observed line intensities if a beam filling factor and a temperature stratification in the shock front are considered. C-type shocks can best explain the emission from H2O. The existence of J-shocks is suggested by the strong atomic/ionic (except for [CII]) emission and a number of line ratio diagnostics. Dissociative shocks can account for the CO and H2 emission in a single excitation temperature structure.
Conclusions: The bulk of cooling from molecular and atomic lines is associated with gas excited in outflow shocks. The strong association between H2 and CO constrain their abundance ratio in warm gas. Both C- and J-type shocks can account for the observed molecular emission; however, J-shocks are strongly suggested by the atomic emission and provide simpler and more homogeneous solutions for CO and H2. The variations in the CO/H2 abundance ratio for gas at different temperatures can be interpreted by their reformation rates in dissociative J-type shocks, or the influence of both C and J shocks.

Herschel is an ESA space observatory with science instruments provided by European-led Principal Investigator consortia and with important participation from NASA.Appendices A-C are available in electronic form at http://www.aanda.org 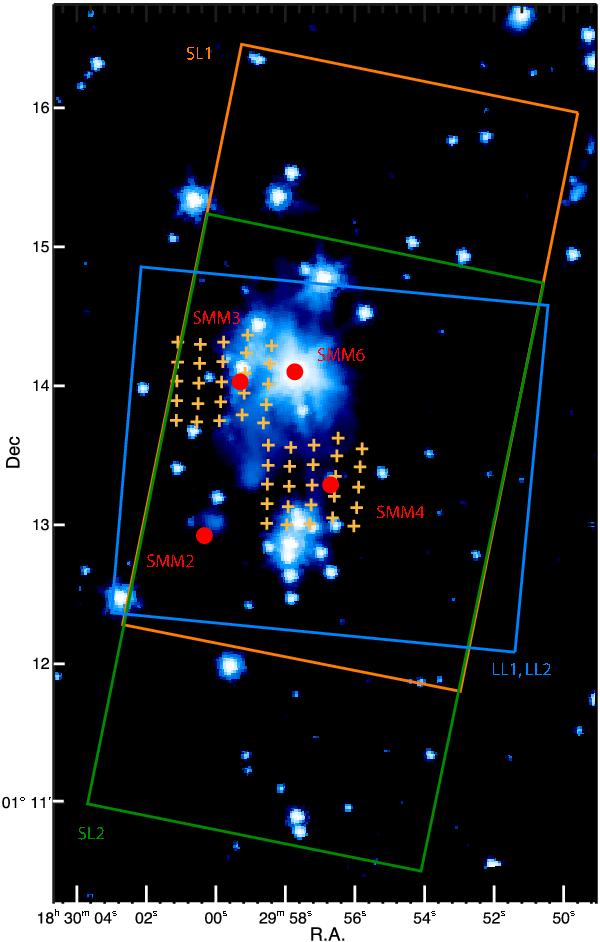