Context. The visibility time of planetary nebulae (PNe) in stellar systems is an essential quantity for estimating the size of a PN population in the context of general population studies. For instance, it enters directly into the PN death rate determination.
Aims: The basic ingredient for determining visibility times is the typical nebular expansion velocity, as a suited average over all PN sizes of a PN population within a certain volume or stellar system. The true expansion speed of the outer nebular edge of a PN is, however, not accessible by spectroscopy - a difficulty that we surmount by radiation-hydrodynamics modelling.
Methods: We first discuss the definition of the PN radius and possible differences between the observable PN radius and its physical counterpart, the position of the leading shock of the nebular shell. We also compare the Hα surface-brightness evolution predicted by our radiation-hydrodynamics models with the recent Hα surface-brightness radius calibration of Frew (2008, Ph.D. Thesis, Macquarie University, Australia) and find excellent agreement. We then carefully investigate the existing spectroscopic data on nebular expansion velocities for a local PN sample with objects up to a distance of 2 kpc with well-defined round/elliptical shapes. We evaluate, by means of our radiation-hydrodynamics models, how these observed expansion velocities must be corrected in order to get the true expansion speed of the outer nebular edge.
Results: We find a mean true expansion velocity of 42 km s-1, i.e. nearly twice as high as the commonly adopted value to date. Accordingly, the time for a PN to expand to a radius of, say 0.9 pc, is only 21 000 ± 5000 years. This visibility time of a PN holds for all central star masses since a nebula does not become extinct as the central star fades. There is, however, a dependence on metallicity in the sense that the visibility time becomes shorter for lower nebular metal content.
Conclusions: These statements on the visibility time only hold for volume-limited samples. Extragalactic samples that contain spatially unresolved nebulae are flux limited, and in this case the visibility time directly depends on the limiting magnitude of the survey. To reach a visibility time of 21 000 years, the survey must reach about 7 mag below the bright cut-off of the planetary nebula luminosity function. With the higher expansion rate of PNe derived here we determined their local death-rate density as (1.4 ± 0.5) × 10-12 PN pc-3 yr-1, using the local PN density advocated by Frew (2008).

Appendix A is available in electronic form at http://www.aanda.orgDedicated to the memory of Volker Weidemann who died on March 14, 2012, at the age of 87 years. 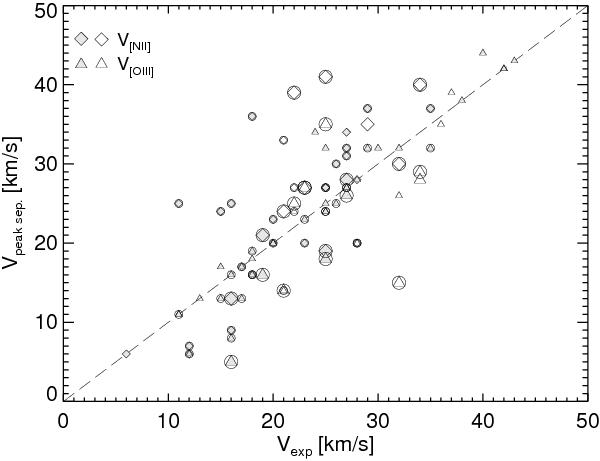