Global survey of star clusters in the Milky Way. II. The catalogue of basic parameters

Context. Although they are the main constituents of the Galactic disk population, for half of the open clusters in the Milky Way reported in the literature nothing is known except the raw position and an approximate size.
Aims: The main goal of this study is to determine a full set of uniform spatial, structural, kinematic, and astrophysical parameters for as many known open clusters as possible.
Methods: On the basis of stellar data from PPMXL and 2MASS, we used a dedicated data-processing pipeline to determine kinematic and photometric membership probabilities for stars in a cluster region.
Results: For an input list of 3784 targets from the literature, we confirm that 3006 are real objects, the vast majority of them are open clusters, but associations and globular clusters are also present. For each confirmed object we determined the exact position of the cluster centre, the apparent size, proper motion, distance, colour excess, and age. For about 1500 clusters, these basic astrophysical parameters have been determined for the first time. For the bulk of the clusters we also derived the tidal radius. We estimated additionally average radial velocities for more than 30% of the confirmed clusters. The present sample (called MWSC) reaches both the central parts of the Milky Way and its outer regions. It is almost complete up to 1.8 kpc from the Sun and also covers neighbouring spiral arms. However, for a small subset of the oldest open clusters (log t ≳ 9) we found some evidence of incompleteness within about 1 kpc from the Sun. 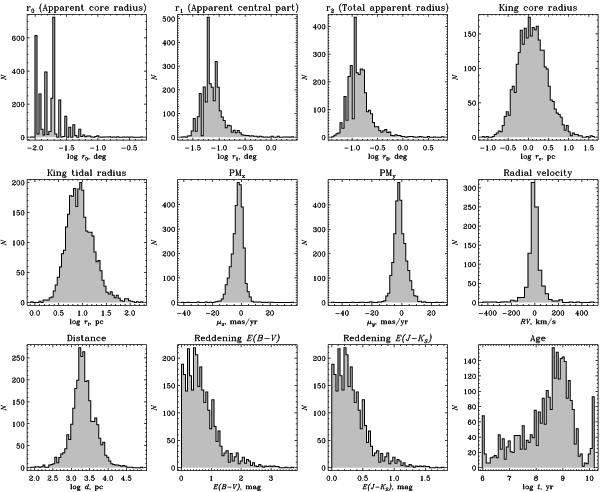