Context. Stars interact with their close-in planets through radiation, gravitation and magnetic fields.
Aims: We investigate the energy input to a planetary atmosphere by reconnection between stellar and planetary magnetic fields and compare it to the energy input of the extreme ultraviolet (EUV) radiation field of the star.
Methods: We quantify the power released by magnetic reconnection at the boundary of the planetary magnetosphere that is conveyed to the atmosphere by accelerated electrons. We introduce simple models to evaluate the energy spectrum of the accelerated electrons and the energy dissipated in the atmospheric layers in the polar region of the planet upon which they impinge. A simple transonic isothermal wind flow along field lines is considered to estimate the increase in mass loss rate in comparison with a planet irradiated only by the EUV flux of its host star.
Results: We find that energetic electrons can reach levels down to column densities of 1023-1025 m-2, comparable with or deeper than EUV photons, and increase the mass loss rate up to a factor of 30-50 in close-in (< 0.10 AU), massive (≥1.5 Jupiter masses) planets. Mass loss rates up to (0.5-1.0) × 109 kg s-1 are found for atmospheres heated by electrons accelerated by magnetic reconnection at the boundary of planetary magnetospheres. On the other hand, average mass loss rates up to (0.3-1.0) × 1010 kg s-1 are found in the case of magnetic loops interconnecting the planet with the star.
Conclusions: The star-planet magnetic interaction provides a remarkable source of energy for planetary atmospheres, generally comparable with or exceeding that of stellar EUV radiation for close-in planets. Therefore, it must be included in models of chemical evolution or evaporation of planetary atmospheres as well as in modelling of light curves of transiting planets at UV wavelengths. 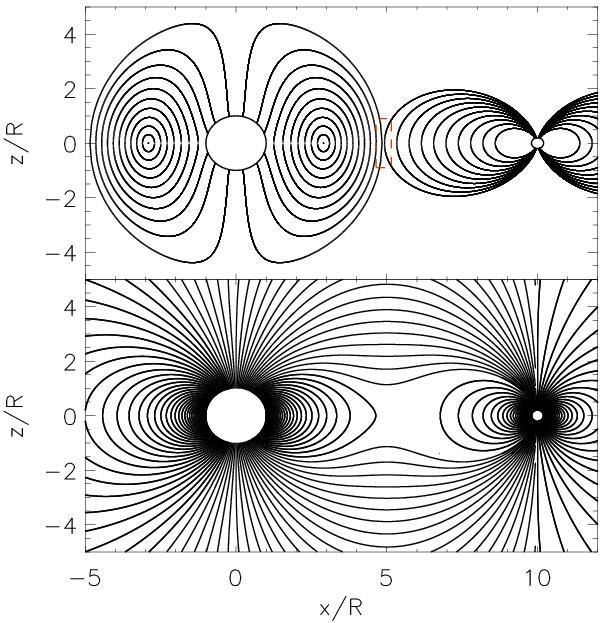