Astrometric orbit of a low-mass companion to an ultracool dwarf

Little is known about the existence of extrasolar planets around ultracool dwarfs. Furthermore, binary stars with Sun-like primaries and very low-mass binaries composed of ultracool dwarfs show differences in the distributions of mass ratio and orbital separation that can be indicative of distinct formation mechanisms. Using FORS2/VLT optical imaging for high precision astrometry we are searching for planets and substellar objects around these dwarfs to investigate their multiplicity properties for very low companion masses. Here we report astrometric measurements with an accuracy of two tenths of a milli-arcsecond over two years that reveal orbital motion of the nearby L1.5 dwarf DENIS-P J082303.1-491201 located at 20.77 ± 0.08 pc caused by an unseen companion that revolves about its host on an eccentric orbit in 246.4 ± 1.4 days. We estimate the L1.5 dwarf to have 7.5 ± 0.7% of the Sun's mass, which implies a companion mass of 28 ± 2 Jupiter masses. This new system has the lowest mass ratio (0.36 ± 0.02) of known very low-mass binaries with characterised orbits. With this discovery we demonstrate 200 micro-arcsecond astrometry over an arc-minute field and over several years that is sufficient for discovering sub-Jupiter mass planets around ultracool dwarfs. We also show that the achieved parallax accuracy of <0.4% makes it possible to remove distance as a dominant source of uncertainty in the modelling of ultracool dwarfs. 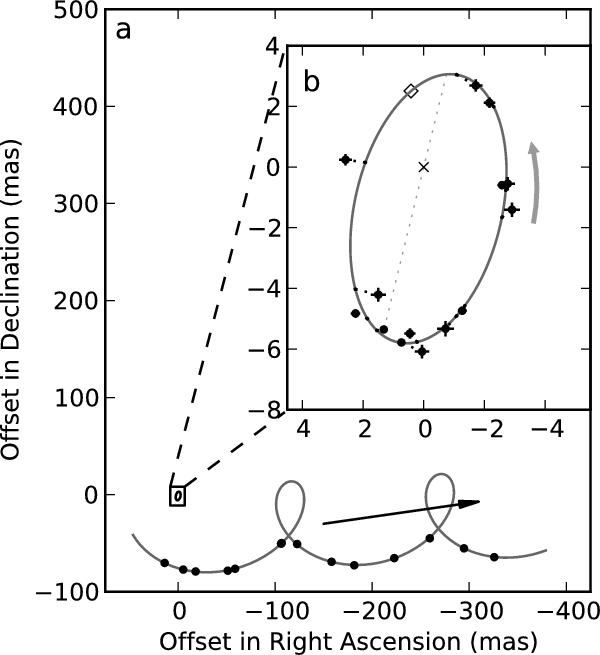