The Arches cluster out to its tidal radius: dynamical mass segregation and the effect of the extinction law on the stellar mass function

The Galactic center is the most active site of star formation in the Milky Way, where particularly high-mass stars have formed very recently and are still forming today. However, since we are looking at the Galactic center through the Galactic disk, knowledge of extinction is crucial when studying this region. The Arches cluster is a young, massive starburst cluster near the Galactic center. We observed the Arches cluster out to its tidal radius using Ks-band imaging obtained with NAOS/CONICA at the VLT combined with Subaru/CISCO J-band data to gain a full understanding of the cluster mass distribution. We show that the determination of the mass of the most massive star in the Arches cluster, which had been used in previous studies to establish an upper mass limit for the star formation process in the Milky Way, strongly depends on the assumed slope of the extinction law. Assuming the two regimes of widely used infrared extinction laws, we show that the difference can reach up to 30% for individually derived stellar masses and ΔAKs ~ 1 magnitude in acquired Ks-band extinction, while the present-day mass function slope changes by ~ 0.17 dex. The present-day mass function slope derived assuming the more recent extinction law increases from a flat slope of αNishi = -1.50 ± 0.35 in the core (r < 0.2 pc) to αNishi = -2.21 ± 0.27 in the intermediate annulus (0.2 < r < 0.4 pc), where the Salpeter slope is -2.3. The mass function steepens to αNishi = -3.21 ± 0.30 in the outer annulus (0.4 < r < 1.5 pc), indicating that the outer cluster region is depleted of high-mass stars. This picture is consistent with mass segregation owing to the dynamical evolution of the cluster.

Based on observations collected at the ESO/VLT under Program ID 081.D-0572(B) (PI: Brandner) and ID 71.C-0344(A) (PI: Eisenhauer, retrieved from the ESO archive). Also based on data collected at the Subaru Telescope, which is operated by the National Astronomical Observatory of Japan.Full Table 5 is available at the CDS via anonymous ftp to http://cdsarc.u-strasbg.fr (ftp://130.79.128.5) or via http://cdsarc.u-strasbg.fr/viz-bin/qcat?J/A+A/556/A26 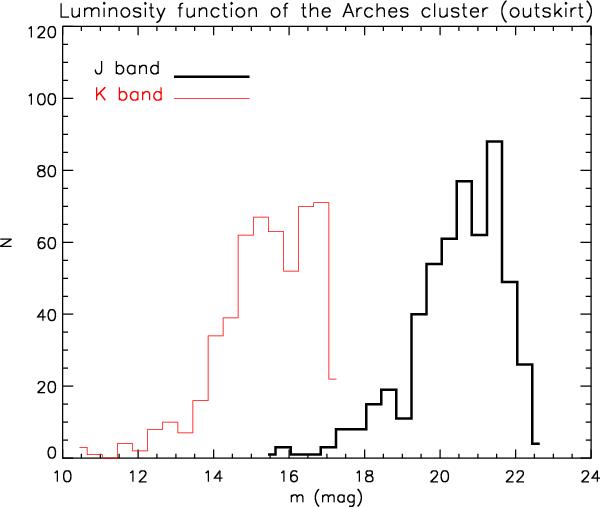