We use deep integral field spectroscopy data from the CALIFA survey to study the warm interstellar medium (wim) over the entire extent and optical spectral range of 32 nearby early-type galaxies (ETGs). We find that faint nebular emission is extended in all cases, and its surface brightness decreases roughly as ∝ r-α. The large standard deviation in the derived α (1.09 ± 0.67) argues against a universal power-law index for the radial drop-off of nebular emission in ETGs. Judging from the properties of their extranuclear component, our sample ETGs span a broad, continuous sequence with respect to their α, Hα equivalent width (EW) and Lyman continuum (Lyc) photon leakage fraction (plf). We propose a tentative subdivision into two groups: Type i ETGs are characterized by rather steep Hα profiles (α ≃ 1.4), comparatively large (≳1 Å), nearly radially constant EWs, and plf ≃ 0. Photoionization by post-AGB stars appears to be the main driver of extended nebular emission in these systems, with nonthermal sources being potentially important only in their nuclei. Typical properties of type II ETGs are shallower Hα profiles (α ≃ 0.8), very low (≲0.5 Å) EWs with positive radial gradients, and a mean plf ≳ 0.7, rising to ≳0.9 in their centers. Such properties point to a low, and inwardly decreasing wim density and/or volume filling factor. We argue that, because of extensive Lyc photon leakage, emission-line luminosities and EWs are reduced in type II ETG nuclei by at least one order of magnitude. Consequently, the line weakness of these ETGs is by itself no compelling evidence for their containing merely "weak"(sub-Eddington accreting) active galactic nuclei (AGN). In fact, Lyc photon escape, which has heretofore not been considered, may constitute a key element in understanding why many ETGs with prominent signatures of AGN activity in radio continuum and/or X-ray wavelengths show only faint emission lines and weak signatures of AGN activity in their optical spectra. The Lyc photon escape, in conjunction with dilution of nuclear EWs by line-of-sight integration through a triaxial stellar host, can systematically impede detection of AGN in gas-poor galaxy spheroids through optical emission-line spectroscopy, thereby leading to an observational bias. We further find that type I&II ETGs differ little (≲0.4 dex) in their mean BPT line ratios, which in both cases are characteristic of LINERs and are, within their uncertainties, almost radius-independent. This potentially hints at a degeneracy of the projected, luminosity-weighted BPT ratios in the LINER regime, for the specific 3D properties of the wim and the ionizing photon field in ETGs.

Based on observations collected at the Centro Astronómico Hispano Alemán (CAHA) at Calar Alto, operated jointly by the Max-Planck-Institut für Astronomie (MPIA) and the Instituto de Astrofísica de Andalucía (CSIC). 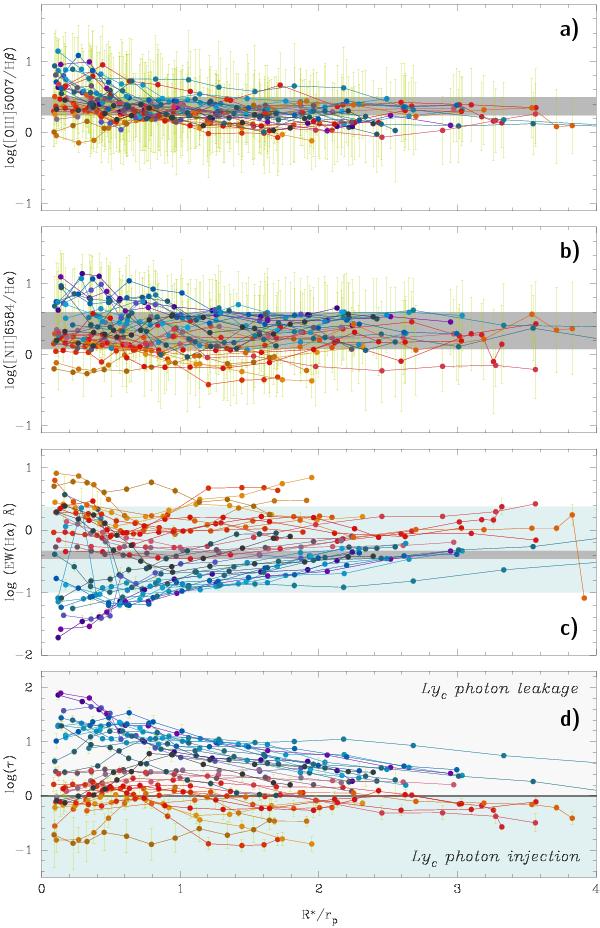