Context. The central field of the Andromeda galaxy (M 31) was monitored from 2006 to 2012 using the Chandra HRC-I detector (about 0.1-10 keV energy range) with the main aim of detecting X-rays from optical novae. We present a systematic analysis of all X-ray sources found in the 41 nova monitoring observations, along with 23 M 31 central field HRC-I observations available from the Chandra data archive starting in December 1999.
Aims: Based on these observations, we studied the X-ray long-term variability of the source population and especially of X-ray binaries in M 31.
Methods: We created a catalogue of sources detected in the 64 available observations that adds up to a total exposure time of about 1 Ms. To study the variability, we developed a processing pipeline to derive long-term Chandra HRC-I light curves for each source over the 13 years of observations. We also searched for extended X-ray sources in the merged images.
Results: We present a point-source catalogue containing 318 X-ray sources with detailed long-term variability information, 28 of which are published for the first time. The spatial and temporal resolution of the catalogue allows us to classify 115 X-ray binary candidates showing high X-ray variability or even outbursts, as well as 14 globular cluster X-ray binary candidates showing no significant variability. The analysis may suggest that outburst sources are less frequent in globular clusters than in the field of M 31. We detected seven supernova remnants, one of which is a new candidate, and also resolved the first X-rays from a known radio supernova remnant. In addition to 33 known optical nova/X-ray source correlations, we discovered one previously unknown super-soft X-ray outburst and several new nova candidates.
Conclusions: The catalogue contains a large sample of detailed long-term X-ray light curves in the M 31 central field, which helps in understanding the X-ray population of our neighbouring spiral galaxy M 31. 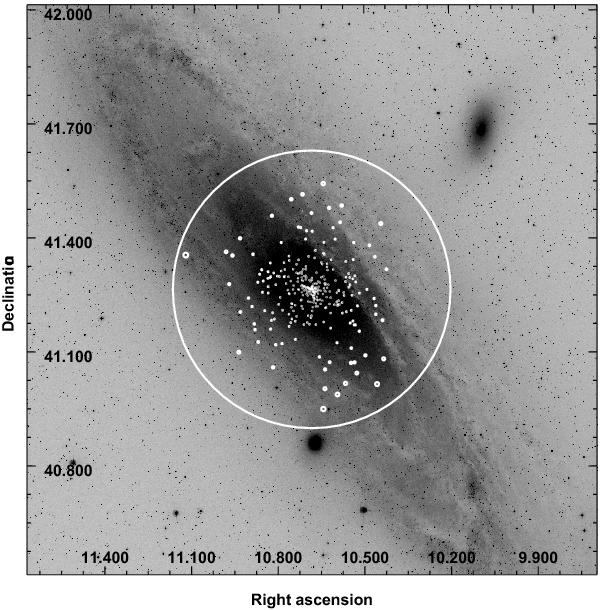