A revised radiometric calibration for the Hinode/EIS instrument

An assessment of the in-flight radiometric calibration of the Hinode EUV Imaging Spectrometer (EIS) is presented. This is done with the line ratio technique applied to a wide range of observations of the quiet Sun, active regions, and flares from 2006 until 2012. The best diagnostic lines and the relevant atomic data are discussed in detail. Radiances over the quiet Sun are also considered, with comparisons with previous measurements. Some departures in the shapes of the ground calibration responsivities are found at the start of the mission. These shapes do not change significantly over time, with the exception of the shorter wavelengths of the EIS short-wavelength (SW) channel, which shows some degradation. The sensitivity of the SW channel at longer wavelengths does not show significant degradation, while that of the long-wavelength (LW) channel shows a significant degradation with time. By the beginning of 2010 the responsivity of the LW channel was already lower than the values measured on the ground by a factor of two or more. A first-order correction is proposed. With this correction, the main ratios of lines in the two channels become constant to within a relative 20%, and the He ii 256 Å radiances over the quiet Sun also become constant over time. This correction removes long-standing discrepancies for a number of lines and ions, in particular those involving the strongest Fe x, Fe xiii, Fe xiv, Fe xvii, and Fe xxiv lines, where discrepancies of factors of more than two were found. These results have important implications for various EIS science analyses, in particular for measurements of temperatures, emission measures and elemental abundances. 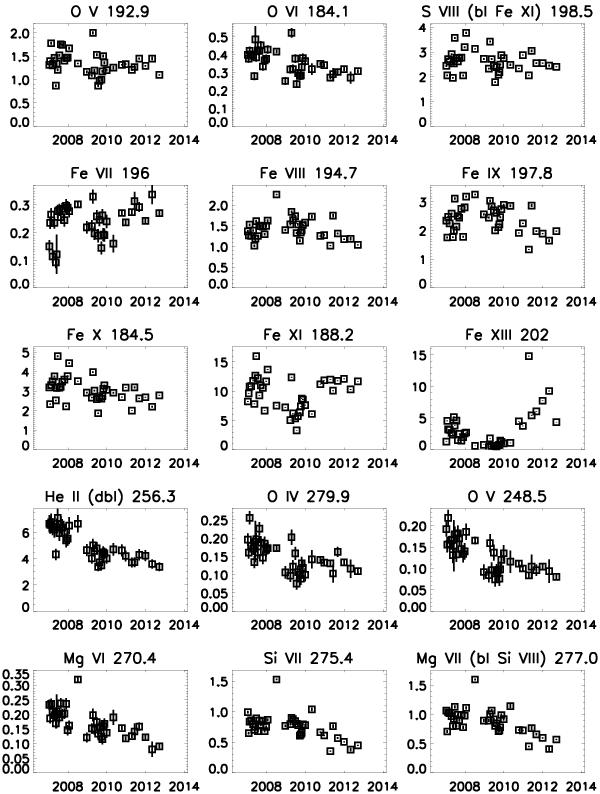