Massive stars at low metallicity. Evolution and surface abundances of O dwarfs in the SMC


Aims: We aim to study the properties of massive stars at low metallicity, with an emphasis on their evolution, rotation, and surface abundances. We focus on O-type dwarfs in the Small Magellanic Cloud. These stars are expected to have weak winds that do not remove significant amounts of their initial angular momentum.
Methods: We analyzed the UV and optical spectra of twenty-three objects using the NLTE stellar atmosphere code cmfgen and derived photospheric and wind properties.
Results: The observed binary fraction of the sample is ≈26%, which is consistent with more systematic studies if one considers that the actual binary fraction is potentially larger owing to low-luminosity companions and that the sample was biased because it excluded obvious spectroscopic binaries. The location of the fastest rotators in the Hertzsprung-Russell (H-R) diagram built with fast-rotating evolutionary models and isochrones indicates that these could be several Myr old. The offset in the position of these fast rotators compared with the other stars confirms the predictions of evolutionary models that fast-rotating stars tend to evolve more vertically in the H-R diagram. Only one star of luminosity class Vz, expected to best characterize extreme youth, is located on the zero-age main sequence, the other two stars are more evolved. We found that the distribution of O and B stars in the ɛ(N) - vsin i diagram is the same, which suggests that the mechanisms responsible for the chemical enrichment of slowly rotating massive stars depend only weakly on the star's mass. We furthermore confirm that the group of slowly rotating N-rich stars is not reproduced by the evolutionary tracks. Even for more massive stars and faster rotators, our results call for stronger mixing in the models to explain the range of observed N abundances. All stars have an N/C ratio as a function of stellar luminosity that match the predictions of the stellar evolution models well. More massive stars have a higher N/C ratio than the less massive stars. Faster rotators show on average a higher N/C ratio than slower rotators, again consistent with the expected trend of stronger mixing as rotation increases. When comparing the N/O versus N/C ratios with those of stellar evolution models, the same global qualitative agreement is reached. The only discrepant behavior is observed for the youngest two stars of the sample, which both show very strong signs of mixing, which is unexpected for their evolutionary status.

Based on observations made with the NASA-ESA Hubble Space Telescope (program GO 11625), obtained at STScI, which is operated by AURA, Inc., under NASA contract NAS 5-26555. Based on observations collected at the European Southern Observatory Very Large Telescope, program 079.D-0073.Appendix B is available in electronic form at http://www.aanda.org 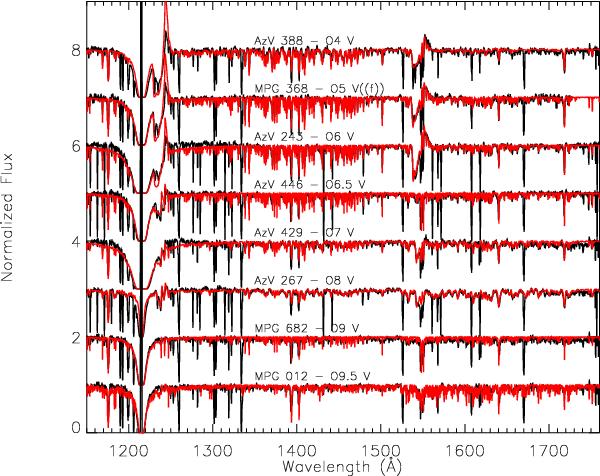