We discuss the results of a mass decomposition of two spiral galaxies, NGC 6824 and UGC 11919. In a previous analysis of the Hyperleda catalog, the galaxies were identified as having a peculiar dynamical mass-to-light ratio. The aim of this study is to confirm or disprove the preliminary findings, indicating a non-standard stellar initial mass function (IMF) for the galaxies. The surface photometry in B,V, and R bands was carried out with the Apache Point 0.5-m telescope and the H I data cubes were obtained with the Westerbork Synthesis Radio Telescope (WSRT). Photometric profiles were decomposed into bulge and exponential disk components. Using the obtained H I data cubes, rotation curves of both galaxies were constructed. Employing the photometric profiles, the mass distribution of the galaxies was decomposed into mass components: bulge, stellar disk, gas, and pseudo-isothermal dark halo. We conclude that NGC 6824 possesses a stellar disk with mass-to-light ratio (M/LB)disk = 2.5, in agreement with its color (B - V)0. On the contrary, UGC 11919 appears to have a very lightweight disk. Its dynamically estimated mass corresponds to a low stellar disk mass-to-light ratio (M/LB)disk ≈ 0.5. Under standard assumptions, this ratio does not agree with the relatively red color of the disk, while a bottom light stellar initial mass function is needed to explain the observations. 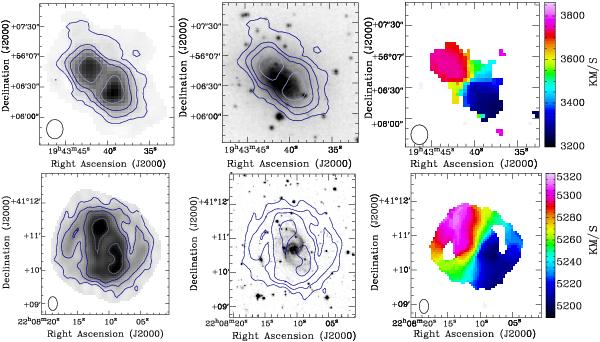