The metallicity signature of evolved stars with planets

Context. Currently, the core accretion model has its strongest observational evidence on the chemical signature of mostly main sequence stars with planets.
Aims: We aim to test whether the well-established correlation between the metallicity of the star and the presence of giant planets found for main sequence stars still holds for the evolved and generally more massive giant and subgiant stars. Although several attempts have been made so far, the results are not conclusive since they are based on small or inhomogeneous samples.
Methods: We determine in a homogeneous way the metallicity and individual abundances of a large sample of evolved stars, with and without known planetary companions, and discuss their metallicity distribution and trends. Our methodology is based on the analysis of high-resolution échelle spectra (R ≥ 67 000) from 2-3 m class telescopes. It includes the calculation of the fundamental stellar parameters (Teff, log g, microturbulent velocity, and metallicity) by applying iron ionisation and excitation equilibrium conditions to several isolated Fe i and Fe ii lines, as well as, calculating individual abundances of different elements such as Na, Mg, Si, Ca, Ti, Cr, Co, or Ni.
Results: The metallicity distributions show that giant stars hosting planets are not preferentially metal-rich because they have similar abundance patterns to giant stars without known planetary companions. We have found, however, a very strong relation between the metallicity distribution and the stellar mass within this sample. We show that while the less massive giant stars with planets (M⋆ ≤ 1.5 M⊙) are not metal rich, the metallicity of the sample of massive (M⋆ > 1.5 M⊙), young (age < 2 Gyr) giant stars with planets is higher than that of a similar sample of stars without planets. Regarding other chemical elements, giant stars with and without planets in the mass domain M⋆ ≤ 1.5 M⊙ show similar abundance patterns. However, planet and non-planet hosts with masses M⋆ > 1.5 M⊙ show differences in the abundances of some elements, specially Na, Co, and Ni. In addition, we find the sample of subgiant stars with planets to be metal rich, showing similar metallicities to main-sequence planet hosts.
Conclusions: While the metallicity distribution of planet-hosting subgiant stars and giant stars with stellar masses M⋆ > 1.5 M⊙ fits well in the predictions of current core-accretion models, the fact that giant planet hosts in the mass domain M⋆ ≤ 1.5 M⊙ do not show metal enrichment is difficult to explain. Given that these stars have similar stellar parameters to subgiants and main-sequence planet hosts, the lack of the metal-rich signature in low-mass giants could be explained by a pollution scenario in the main sequence that gets erased as the star becomes fully convective. However, there is no physical reason why it should play a role for giants with masses M⋆ ≤ 1.5 M⊙ yet not be observed for giants with M⋆ > 1.5 M⊙. 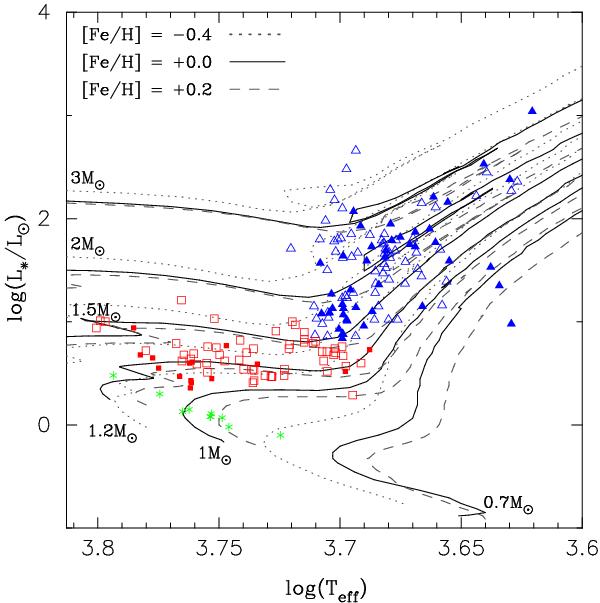