Dynamical mass of the O-type supergiant in ζ Orionis A


Aims: A close companion of ζ Orionis A was found in 2000 with the Navy Precision Optical Interferometer (NPOI), and shown to be a physical companion. Because the primary is a supergiant of type O, for which dynamical mass measurements are very rare, the companion was observed with NPOI over the full 7-year orbit. Our aim was to determine the dynamical mass of a supergiant that, due to the physical separation of more than 10 AU between the components, cannot have undergone mass exchange with the companion.
Methods: The interferometric observations allow measuring the relative positions of the binary components and their relative brightness. The data collected over the full orbital period allows all seven orbital elements to be determined. In addition to the interferometric observations, we analyzed archival spectra obtained at the Calar Alto, Haute Provence, Cerro Armazones, and La Silla observatories, as well as new spectra obtained at the VLT on Cerro Paranal. In the high-resolution spectra we identified a few lines that can be associated exclusively to one or the other component for the measurement of the radial velocities of both. The combination of astrometry and spectroscopy then yields the stellar masses and the distance to the binary star.
Results: The resulting masses for components Aa of 14.0 ± 2.2 M⊙ and Ab of 7.4 ± 1.1 M⊙ are low compared to theoretical expectations, with a distance of 294 ± 21 pc which is smaller than a photometric distance estimate of 387 ± 54 pc based on the spectral type B0III of the B component. If the latter (because it is also consistent with the distance to the Orion OB1 association) is adopted, the mass of the secondary component Ab of 14 ± 3 M⊙ would agree with classifying a star of type B0.5IV. It is fainter than the primary by about 2.2 ± 0.1 magnitudes in the visual. The primary mass is then determined to be 33 ± 10 M⊙. The possible reasons for the distance discrepancy are most likely related to physical effects, such as small systematic errors in the radial velocities due to stellar winds. 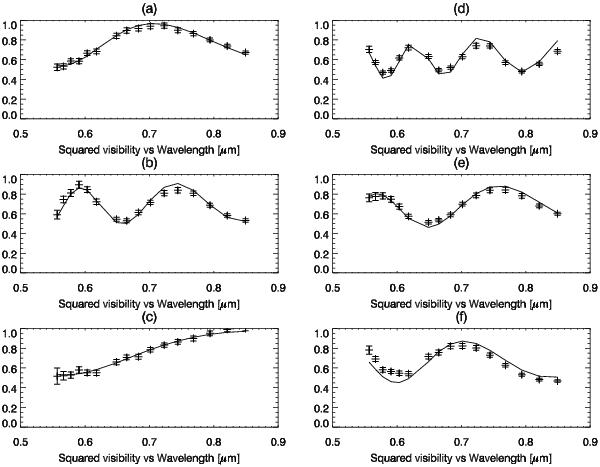