This work investigates the effect of the aperture size on derived galaxy properties for which we have spatially-resolved optical spectra. We focus on some indicators of star formation activity and dust attenuation for spiral galaxies that have been widely used in previous work on galaxy evolution. We investigated 104 spiral galaxies from the CALIFA survey for which 2D spectroscopy with complete spatial coverage is available. From the 3D cubes we derived growth curves of the most conspicuous Balmer emission lines (Hα, Hβ) for circular apertures of different radii centered at the galaxy's nucleus after removing the underlying stellar continuum. We find that the Hα flux (f(Hα)) growth curve follows a well-defined sequence with aperture radius that shows a low dispersion around the median value. From this analysis, we derived aperture corrections for galaxies in different magnitude and redshift intervals. Once stellar absorption is properly accounted for, the f(Hα)/f(Hβ) ratio growth curve shows a smooth decline, pointing toward the absence of differential dust attenuation as a function of radius. Aperture corrections as a function of the radius are provided in the interval [0.3, 2.5]R50. Finally, the Hα equivalent-width (EW(Hα)) growth curve increases with the size of the aperture and shows a very high dispersion for small apertures. This prevents us from using reliable aperture corrections for this quantity. In addition, this result suggests that separating star-forming and quiescent galaxies based on observed EW(Hα) through small apertures will probably result in low EW(Hα) star-forming galaxies begin classified as quiescent. 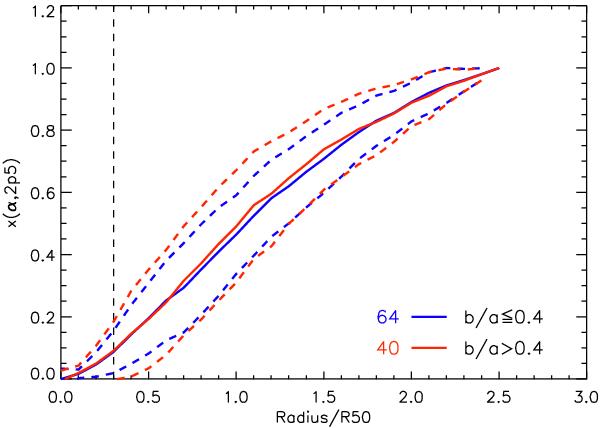