Photospheric activity, rotation, and magnetic interaction in LHS 6343 A

Context. The Kepler mission has recently discovered a brown dwarf companion transiting one member of the M4V+M5V visual binary system LHS 6343 AB with an orbital period of 12.71 days.
Aims: The particular interest of this transiting system lies in the synchronicity between the transits of the brown dwarf C component and the main modulation observed in the light curve, which is assumed to be caused by rotating starspots on the A component. We model the activity of this star by deriving maps of the active regions that allow us to study stellar rotation and the possible interaction with the brown dwarf companion.
Methods: An average transit profile was derived, and the photometric perturbations due to spots occulted during transits are removed to derive more precise transit parameters. We applied a maximum entropy spot model to fit the out-of-transit optical modulation as observed by Kepler during an uninterrupted interval of ~500 days. It assumes that stellar active regions consist of cool spots and bright faculae whose visibility is modulated by stellar rotation.
Results: Thanks to the extended photometric time series, we refine the determination of the transit parameters and find evidence of spots that are occulted by the brown dwarf during its transits. The modelling of the out-of-transit light curve of LHS 6343 A reveals several starspots rotating with a slightly longer period than the orbital period of the brown dwarf, i.e., 13.13 ± 0.02 days. No signature attributable to differential rotation is observed. We find evidence of a persistent active longitude on the M dwarf preceding the sub-companion point by ~100° and lasting for at least ~500 days. This can be relevant for understanding how magnetic interaction works in low-mass binary and star-planet systems. 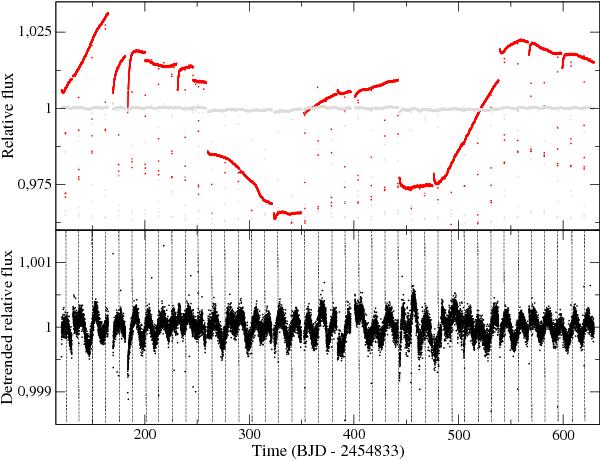