Aims: Hot Jupiters are thought to belong to single-planet systems. Somewhat surprisingly, some hot Jupiters have been reported to exhibit transit timing variations (TTVs). The aim of this paper is to identify the origin of these observations, identify possible periodic biases leading to false TTV detections, and refine the sample to a few candidates with likely dynamical TTVs.
Methods: We present TTV frequencies and amplitudes of hot Jupiters in Kepler Q0-6 data with Fourier analysis and a frequency-dependent bootstrap calculation to assess the false alarm probability levels of the detections.
Results: We identified 36 systems with TTV above four standard deviation confidence, about half of them exhibiting multiple TTV frequencies. Fifteen of these objects (, , 127, 183, 188, 190, 196, 225, 254, 428, 607, 609, 684, 774, 1176) probably show TTVs due to a systematic observational effect: long cadence data sampling is regularly shifted transit-by-transit, interacting with the transit light curves, introducing a periodic bias, and leading to a stroboscopic period. For other systems, the activity and rotation of the host star can modulate light curves and explain the observed TTVs. By excluding the systems that were inadequately sampled, showed TTV periods related to the stellar rotation, or turned out to be false positives or suspects, we ended up with seven systems. Three of them (KOI-186, 897, 977) show the weakest stellar rotation features, and these are our best candidates for dynamically induced TTV variations.
Conclusions: Those systems with periodic TTVs that we cannot explain with systematics from observation, stellar rotation, activity, or inadequate sampling, may be multiple systems or even exomoon hosts. 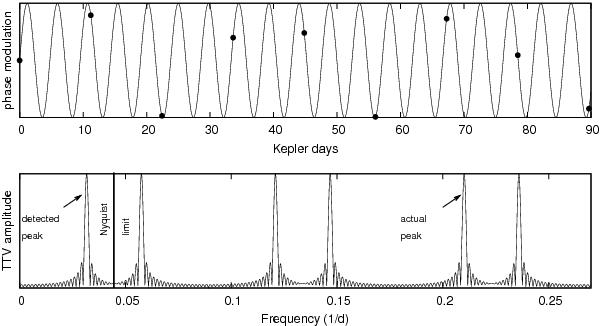