Context. Using known frequencies of the twin-peak high-frequency quasiperiodic oscillations (HF QPOs) and known mass of the central black hole, the black-hole dimensionless spin a can be determined by assuming a concrete version of the resonance model. However, a wide range of observationally limited values of the black hole mass implies low precision of the spin estimates.
Aims: We discuss the possibility of higher precision for the black hole spin a measurements in the framework of a multi-resonance model inspired by observations of more than two HF QPOs in the black hole systems, which are expected to occur at two (or more) different radii of the accretion disc. This framework is also applied in a modified form to the neutron star systems.
Methods: We determine the spin and mass dependence of the twin-peak frequencies with a general rational ratio n:m, assuming a non-linear resonance of oscillations with the epicyclic and Keplerian frequencies or their combinations. In the multi-resonant model, the twin-peak resonances are combined properly to give the observed frequency set. For the black hole systems we focus on the special case of duplex frequencies, when the top, bottom, or mixed frequency is common at two different radii where the resonances occur giving triple frequency sets.
Results: The sets of triple frequency ratios and the related spin a are given. The resonances are considered up to n = 5 since excitation of higher order resonances is improbable. The strong resonance model for "magic" values of the black hole spin means that two (or more) versions of resonance could occur at the same radius, allowing cooperative effects between the resonances. For neutron star systems we introduce a resonant switch model that assumes switching of oscillatory modes at resonant points.
Conclusions: In the case of doubled twin-peak HF QPOs excited at two different radii with common top, bottom, or mixed frequency, the black hole spin a is given by the triple frequency ratio set. The spin is determined precisely, but not uniquely, because the same frequency set could correspond to more than one concrete spin a. The black hole mass is given by the magnitude of the observed frequencies. The resonant switch model puts relevant limits on the mass and spin of neutron stars, and we expect a strong increase in the fitting procedure precision when different twin oscillatory modes are applied to data in the vicinity of different resonant points. We expect the multi-resonance model to be applicable to data from the planned LOFT or similar X-ray satellite observatory. 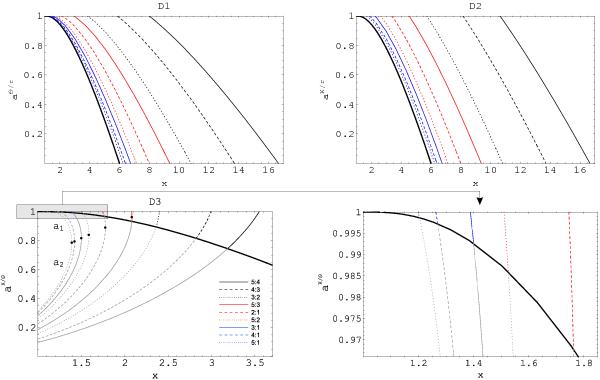