Context. Stable co-orbital motion with Uranus is vulnerable to planetary migration, but temporary co-orbitals may exist today. So far, only two candidates have been suggested, both moving on horseshoe orbits: 83982 Crantor (2002 GO9) and 2000 SN331.
Aims: (83982) Crantor is currently classified in the group of the Centaurs by the MPC although the value of its orbital period is close to that of Uranus. Here we revisit the topic of the possible 1:1 commensurability of (83982) Crantor with Uranus, explore its dynamical past, and look into its medium-term stability and future orbital evolution.
Methods: Our analysis is based on the results of N-body calculations that use the most updated ephemerides and include perturbations by the eight major planets, the Moon, the barycenter of the Pluto-Charon system, and the three largest asteroids.
Results: (83982) Crantor currently moves inside Uranus' co-orbital region on a complex horseshoe orbit. The motion of this object is primarily driven by the influence of the Sun and Uranus, although Saturn plays a significant role in destabilizing its orbit. The precession of the nodes of (83982) Crantor, which is accelerated by Saturn, controls its evolution and short-term stability. Although this object follows a temporary horseshoe orbit, more stable trajectories are possible and we present 2010 EU65 as a long-term horseshoe librator candidate in urgent need of follow-up observations. Available data indicate that the candidate 2000 SN331 is not a Uranus' co-orbital.
Conclusions: Our calculations confirm that (83982) Crantor is currently trapped in the 1:1 commensurability with Uranus but it is unlikely to be a primordial 1:1 librator. Although this object follows a chaotic, short-lived horseshoe orbit, longer term horseshoe stability appears to be possible. We also confirm that high-order resonances with Saturn play a major role in destabilizing the orbits of Uranus co-orbitals.

Figures 2 and 6 (animations) are available in electronic form at http://www.aanda.org 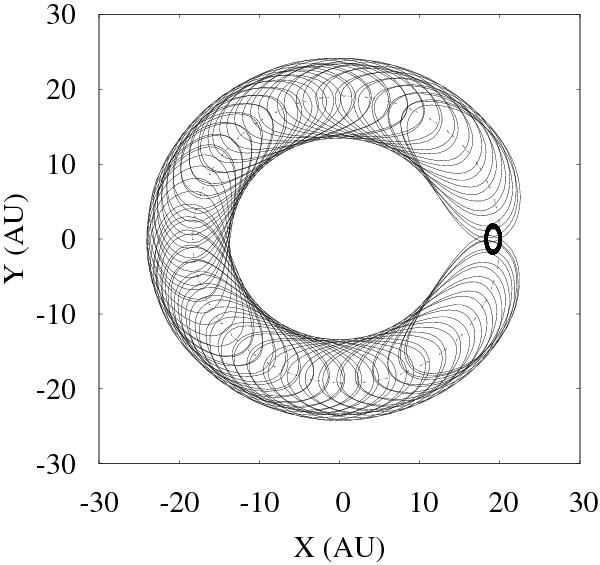