Context. The extrasolar planet HAT-P-8 b was thought to be one of the more inflated transiting hot Jupiters.
Aims: By using new and existing photometric data, we computed precise estimates of the physical properties of the system.
Methods: We present photometric observations comprising eleven light curves covering six transit events, obtained using five medium-class telescopes and telescope-defocussing technique. One transit was simultaneously obtained through four optical filters, and two transits were followed contemporaneously from two observatories. We modelled these and seven published datasets using the jktebop code. The physical parameters of the system were obtained from these results and from published spectroscopic measurements. In addition, we investigated the theoretically-predicted variation of the apparent planetary radius as a function of wavelength, covering the range 330-960 nm.
Results: We find that HAT-P-8 b has a significantly lower radius (1.321 ± 0.037 RJup) and mass (1.275 ± 0.053 MJup) compared to previous estimates (1.50-0.06+0.08 R_{Jup} and 1.52-0.16+0.18 M_{Jup} respectively). We also detect a radius variation in the optical bands that, when compared with synthetic spectra of the planet, may indicate the presence of a strong optical absorber, perhaps TiO and VO gases, near the terminator of HAT-P-8 b.
Conclusions: These new results imply that HAT-P-8 b is not significantly inflated, and that its position in the planetary mass-radius diagram is congruent with those of many other transiting extrasolar planets. 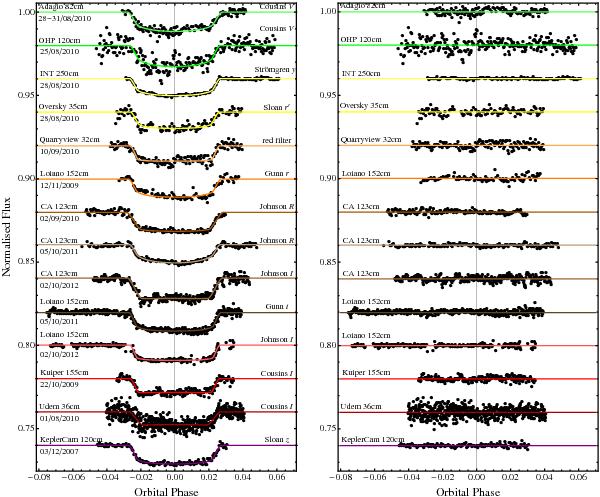