Context. Near-Earth asteroid 162173 (1999 JU3) is a potential target of two asteroid sample return missions, not only because of its accessibility but also because of the first C-type asteroid for exploration missions. The lightcurve-related physical properties of this object were investigated during the 2011-2012 apparition.
Aims: We aim to confirm the physical parameters useful for JAXA's Hayabusa 2 mission, such as rotational period, absolute magnitude, and phase function. Our data complement previous studies that did not cover low phase angles.
Methods: With optical imagers and 1-2 m class telescopes, we acquired the photometric data at different phase angles. We independently derived the rotational lightcurve and the phase curve of the asteroid.
Results: We have analyzed the lightcurve of 162173 (1999 JU3), and derived a synodic rotational period of 7.625 ± 0.003 h, the axis ratio a/b = 1.12. The absolute magnitude HR = 18.69 ± 0.07 mag and the phase slope of G = -0.09 ± 0.03 were also obtained based on the observations made during the 2011 - 2012 apparition. These physical properties are in good agreement with the previous results obtained during the 2007-2008 apparition. 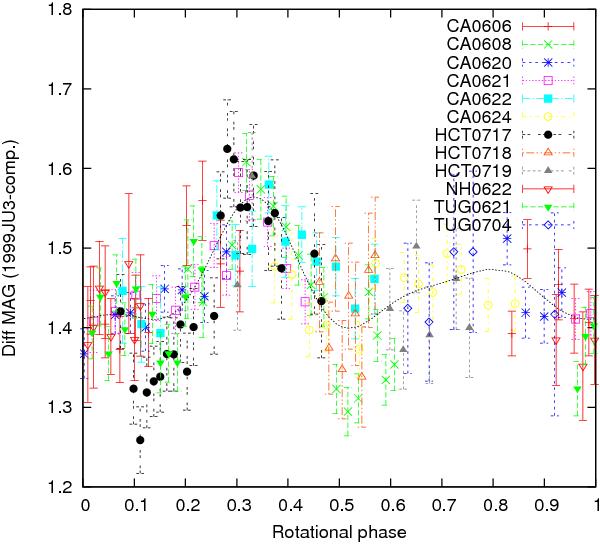