Context. Pulsations in pre-main sequence stars have been discovered several times within the last years. But nearly all of these pulsators are of δ Scuti-type. γ Doradus-type pulsation in young stars has been predicted by theory, but lack observational evidence.
Aims: We present the investigation of variability caused by rotation and (γ Doradus-type) pulsation in two pre-main sequence members of the young open cluster NGC 2264 using high-precision time series photometry from the CoRoT satellite and dedicated high-resolution spectroscopy.
Methods: The variability found using the CoRoT data was combined with the fundamental parameters and chemical abundances derived from high-resolution spectroscopy, obtained at the Mc Donald Observatory, to discuss the presence of pulsation and rotation in the two NGC 2264 cluster members. Time series photometry of NGC 2264 VAS 20 and NGC 2264 VAS 87 was obtained by the CoRoT satellite during the dedicated short run SRa01 in March 2008. NGC 2264 VAS 87 was re-observed by CoRoT during the short run SRa05 in December 2011 and January 2012. Frequency analysis was conducted using Period04 and SigSpec. The spectral analysis was performed using equivalent widths and spectral synthesis.
Results: The frequency analysis yielded ten (NGC 2264 VAS 20) and fourteen (NGC 2264 VAS 87) intrinsic frequencies in the range from 0 to 1.5 d-1, which are attributed to be caused by a combination of rotation and pulsation. The effective temperatures were derived to be 6380 ± 150 K for NGC 2264 VAS 20 and 6220 ± 150 K for NGC 2264 VAS 87. Membership of the two stars to the cluster is confirmed independently using X-ray fluxes, radial velocity measurements, and proper motions available in the literature. The derived lithium abundances of log n(Li) = 3.34 and 3.54 for NGC 2264 VAS 20 and NGC 2264 VAS 87 agree with the lithium abundance for other stars in NGC 2264 of similar Teff reported in the literature.
Conclusions: We conclude that the two objects are members of NGC 2264 and therefore are in their pre-main sequence evolutionary stage. Their variability is attributed to be caused by rotation and g-mode pulsation rather than rotation only. Assuming that part of their variability is caused by pulsation, these two stars might be the first pre-main sequence γ Doradus candidates.

The CoRoT space mission was developed and is operated by the French space agency CNES, with participation of ESA's RSSD and Science Programmes, Austria, Belgium, Brazil, Germany, and Spain. 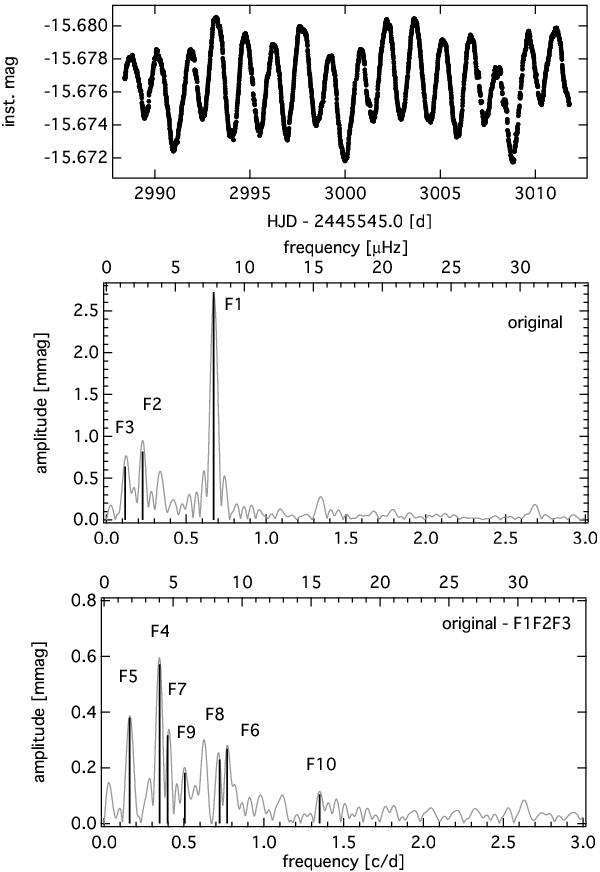