Context. The characterization of multiple stellar systems is an important ingredient for testing current star formation models. Stars are more often found in multiple systems, the more massive they are. A complete knowledge of the multiplicity of high-mass stars over the full range of orbit separations is thus essential to understand their still debated formation process.
Aims: Infrared long baseline interferometry is very well suited to close the gap between spectroscopic and adaptive optics searches. Observations of the Orion Nebula Cluster (ONC) in general and the Trapezium Cluster in particular can help to answer the question about the origin and evolution of multiple stars. Earlier studies provide a good knowledge about the multiplicity of the stars at very small (spectroscopic companions) and large separations (AO, speckle companions) and thus make the ONC a good target for such a project.
Methods: We used the near infrared interferometric instrument AMBER at ESOs Very Large Telescope Interferometer to observe a sample of bright stars in the ONC. We complement our data set by archival NACO observations of θ1 Ori A to obtain more information about the orbit of the close visual companion.
Results: Our observations resolve the known multiple systems θ1 Ori C and θ1 Ori A and provide new orbit points, which confirm the predicted orbit and the determined stellar parameters for θ1 Ori C. Combining AMBER and NACO data for θ1 Ori A we were able to follow the (orbital) motion of the companion from 2003 to 2011. We furthermore find hints for a companion around θ1 Ori D, whose existence has been suggested already before, and a previously unknown companion to NU Ori. With a probability of ~90% we can exclude further companions with masses of ≥ 3 M☉ around our sample stars for separations between ~2 mas and ~110 mas.
Conclusions: We conclude that the companion around θ1 Ori A is most likely physically related to the primary star and not only a chance projected star. The newly discovered possible companions further increase the multiplicity in the ONC. For our sample of two O and three B-type stars we find on average 2.5 known companions per primary, which is around five times more than for low-mass stars.

Based on observations collected at the European Organisation for Astronomical Research in the Southern Hemisphere, Chile, observing program 086.C-0193.Tables 1, 5, and Appendix A are available in electronic form at http://www.aanda.org 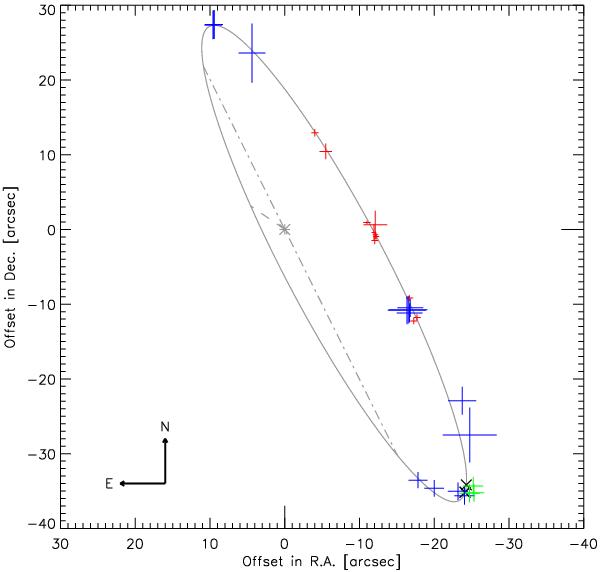