Context. Be stars are fast-rotating early-type emission line stars. It is generally assumed that observed emission is generated in a rotating disk-like envelope, as supported by the observed correlation between the stellar projected rotational velocity vsini and the width of the emission lines. Then, high-resolution spectroscopic observations of Balmer lines profiles play an important role in putting constraints on Be stars modeling.
Aims: We present Balmer lines spectroscopy for a sample of 48 Be stars. For most of them, Hα and Hβ have been observed more than two times, in a total period spanning almost two years between 2008 and 2009.
Methods: Spectral synthesis of the Hα profile was performed following two steps: photospheric contribution was computed by using Kurucz's code ATLAS9 and SYNTHE, and disk emission was derived by the approach of Hummel & Vrancken (2000, A&A, 302, 751).
Results: For 26 out of 48 stars, a modeling of the total Hα emission, i.e. photospheric absorption plus disk net emission, has been attempted. By this modeling we derived an estimation of the disk radius, as well as the inclination angle between the rotational axis with line of sight and the base density at the stellar equator. For the stars observed more than once, we also discuss the variability of Hα and Hβ for what concerns both the equivalent width and the spectral profile. We found 16 stars with variable equivalent width and 7 stars with clear signs of profile variations.
Conclusions: For all the stars in our sample, we derive all the fundamental astrophysical quantities, such as, effective temperature, gravity, and projected rotational velocity. We found 13 stars whose equivalent width is variable with a confidence level greater than 80% and 7 object for which spectral profiles show change with time. According to the commonly used classification scheme, we classified 16 stars as belonging to class 1, 13 to class 2, 11 are shell stars, 6 objects do not show net emission, and 2 stars display transitions from class 1 and 2. For the class 1 stars, we confirm the correlation between vsini and peak separation. Concerning the geometry of the disk, we derived the base density at the stellar equator, the radius, and the inclination angle between rotational axis and line of sight. The maximum concentration of stars occurs for disk dimensions ranging in the interval of 6 to 8 stellar radii and for inclination angles going from 23° to 35°. 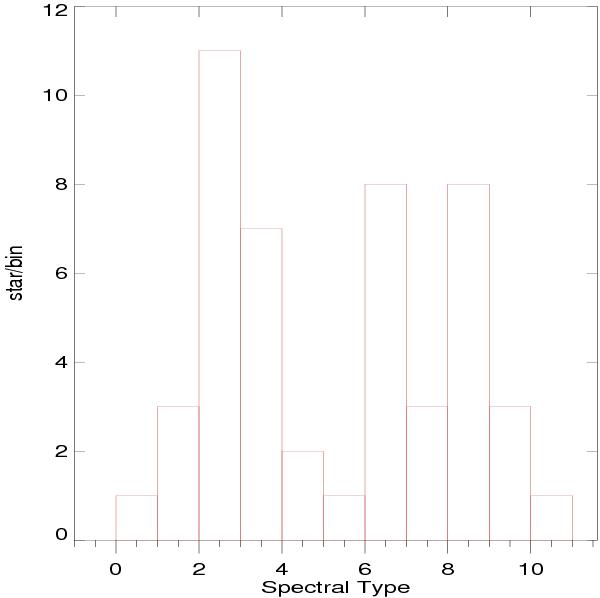