The GROUSE project. III. Ks-band observations of the thermal emission from WASP-33b

Context. In recent years, day-side emission from about a dozen hot Jupiters has been detected through ground-based secondary eclipse observations in the near-infrared. These near-infrared observations are vital for determining the energy budgets of hot Jupiters, since they probe the planet's spectral energy distribution near its peak.
Aims: The aim of this work is to measure the Ks-band secondary eclipse depth of WASP-33b, the first planet discovered to transit an A-type star. This planet receives the highest level of irradiation of all transiting planets discovered to date. Furthermore, its host-star shows pulsations and is classified as a low-amplitude δ Scuti.
Methods: As part of our GROUnd-based Secondary Eclipse (GROUSE) project we have obtained observations of two separate secondary eclipses of WASP-33b in the Ks-band using the LIRIS instrument on the William Herschel Telescope (WHT). The telescope was significantly defocused to avoid saturation of the detector for this bright star (K ~ 7.5). To increase the stability and the cadence of the observations, they were performed in staring mode. We collected a total of 5100 and 6900 frames for the first and the second night respectively, both with an average cadence of 3.3 s.
Results: On the second night the eclipse is detected at the 12 -σ level, with a measured eclipse depth of 0.244-0.020+0.027%. This eclipse depth corresponds to a brightness temperature of 3270-160+115 K. The measured brightness temperature on the second night is consistent with the expected equilibrium temperature for a planet with a very low albedo and a rapid re-radiation of the absorbed stellar light. For the other night the short out-of-eclipse baseline prevents good corrections for the stellar pulsations and systematic effects, which makes this dataset unreliable for eclipse depth measurements. This demonstrates the need of getting a sufficient out-of-eclipse baseline. 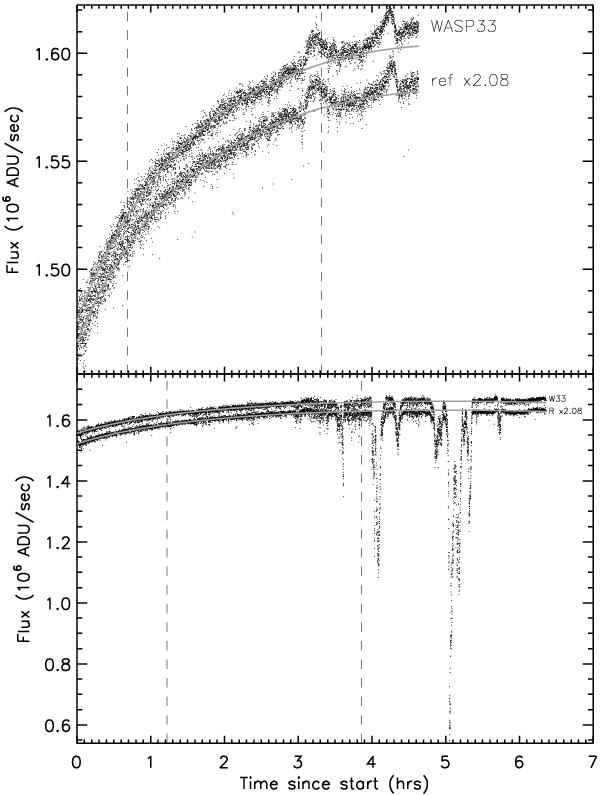