Population gradients and photometric metallicities in early- and transition-type dwarf galaxies: Clues from the Sculptor group


Aims: We focus on the resolved stellar populations of one early-type and four transition-type dwarf galaxies in the Sculptor group, with the aim to examine the potential presence of population gradients and place constraints on their mean metallicities.
Methods: We use deep Hubble Space Telescope images to construct color-magnitude diagrams, from which we select stellar populations that trace different evolutionary phases in order to constrain their range of ages and metallicities, as well as to examine their spatial distribution. In addition, we use the resolved stars in the red giant branch in order to derive photometric metallicities.
Results: All studied dwarfs contain intermediate-age stars with ages of ~1 Gyr and older as traced by the luminous asymptotic giant branch and red clump stars, while the transition-type dwarfs contain also stars younger than ~1 Gyr as traced by a young main sequence and vertical red clump stars. Moreover, the spatial distribution of the stars that trace different evolutionary phases shows a population gradient in all transition-type dwarfs. The derived error-weighted mean metallicities, assuming purely old stellar populations, range from -1.5 dex for ESO294-G010 to -1.9 dex for Scl-dE1, and should be considered as lower limits to their true metallicities. Assuming intermediate-age stellar populations to dominate the dwarfs, we derive upper limits for the metallicities that are 0.3 to 0.2 dex higher than the metallicities derived assuming purely old populations. We discuss how photometric metallicity gradients are affected by the age-metallicity degeneracy, which prevents strong conclusions regarding their actual presence. Finally, the transition-type dwarfs lie beyond the virial radius of their closest bright galaxy, as also observed for the Local Group transition-type dwarfs. Scl-dE1 is the only dwarf spheroidal in our sample and is an outlier in a potential morphology-distance relation, similar as the two isolated dwarf spheroidals of the Local Group, Tucana, and Cetus.

Based on observations made with the NASA/ESA Hubble Space Telescope, obtained from the data archive at the Space Telescope Institute. STScI is operated by the association of Universities for Research in Astronomy, Inc. under the NASA contract NAS 5-26555.Figures 2, 5, 6 and Appendices A-C are available in electronic form at http://www.aanda.orgPhotometry tables are only available at the CDS via anonymous ftp to cdsarc.u-strasbg.fr (130.79.128.5) or via http://cdsarc.u-strasbg.fr/viz-bin/qcat?J/A+A/550/A7 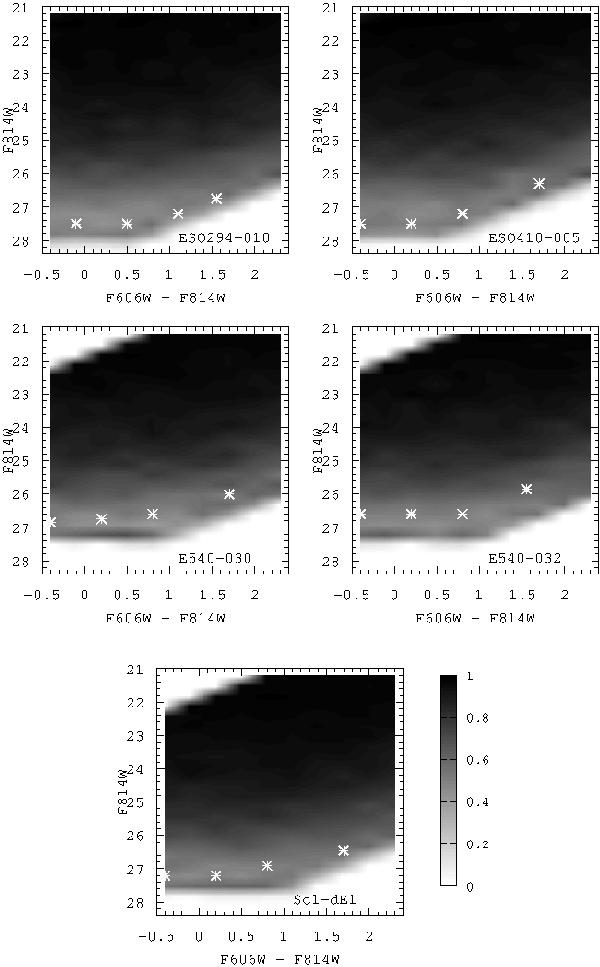