Habitable-zone super-Earth candidate in a six-planet system around the K2.5V star HD 40307

Context. The K2.5 dwarf HD 40307 has been reported to host three super-Earths. The system lacks massive planets and is therefore a potential candidate for having additional low-mass planetary companions.
Aims: We re-derive Doppler measurements from public HARPS spectra of HD 40307 to confirm the significance of the reported signals using independent data analysis methods. We also investigate these measurements for additional low-amplitude signals.
Methods: We used Bayesian analysis of our radial velocities to estimate the probability densities of different model parameters. We also estimated the relative probabilities of models with differing numbers of Keplerian signals and verified their significance using periodogram analyses. We investigated the relation of the detected signals with the chromospheric emission of the star. As previously reported for other objects, we found that radial velocity signals correlated with the S-index are strongly wavelength dependent.
Results: We identify two additional clear signals with periods of 34 and 51 days, both corresponding to planet candidates with minimum masses a few times that of the Earth. An additional sixth candidate is initially found at a period of 320 days. However, this signal correlates strongly with the chromospheric emission from the star and is also strongly wavelength dependent. When analysing the red half of the spectra only, the five putative planetary signals are recovered together with a very significant periodicity at about 200 days. This signal has a similar amplitude as the other new signals reported in the current work and corresponds to a planet candidate with Msini ~ 7 M⊕ (HD 40307 g).
Conclusions: We show that Doppler measurements can be filtered for activity-induced signals if enough photons and a sufficient wavelength interval are available. If the signal corresponding to HD 40307 g is a genuine Doppler signal of planetary origin, this candidate planet might be capable of supporting liquid water on its surface according to the current definition of the liquid water habitable zone around a star and is not likely to suffer from tidal locking. Also, at an angular separation of ~46 mas, HD 40307 g would be a primary target for a future space-based direct-imaging mission. 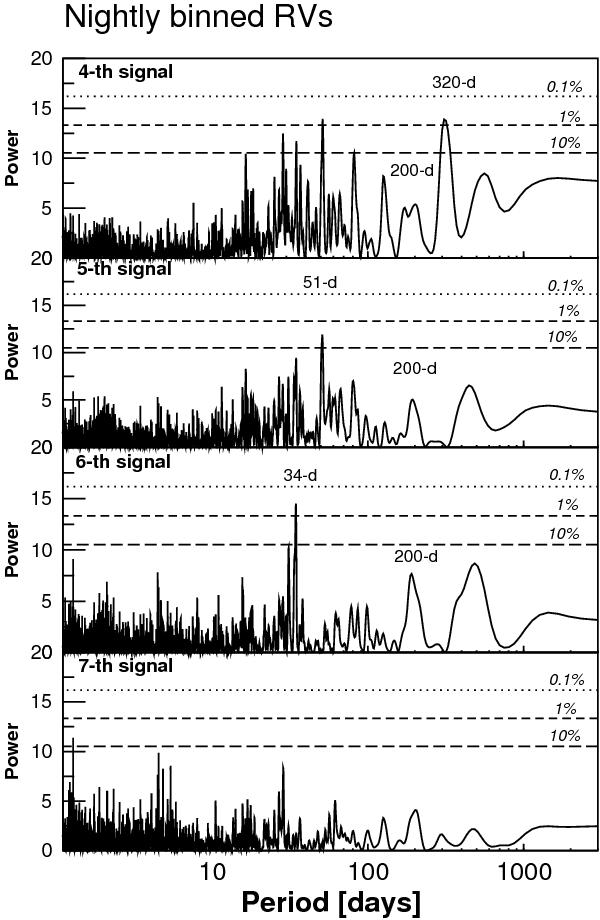