Context. Circumstellar disks are expected to be planet birthplaces. The potential for forming one or more planets of various masses is essentially driven by the initial mass of the disks, a crucial parameter for any planet formation theory. Constraining the masses of disks is of great interest for low-mass stars, which are expected to harbor less massive disks.
Aims: We present and analyze Herschel/PACS observations of disk-bearing M-type stars that belong to the young ~2 Myr old Chamaleon-I star-forming region, to better constrain the properties of the circumstellar material and the stellar mass dependence of these parameters.
Methods: We used the radiative transfer code RADMC to successfully model the spectral energy distributions (SEDs) of 17 M-type stars detected at PACS wavelengths. Our modeling strategy is carefully designed so that we search for the most probable disks parameters among a large grid of models, via Bayesian inference, which is an approach that has already proven successful.
Results: Based on the modeling results, we first discuss the relatively low detection rates of M5 and later spectral type stars with respect to the PACS sensitivity, and argue that their disks masses, or flaring indices, are likely to be low (Mdisk ~ 10-5 M⊙, γ ~ 1.1). For M0 to M3 stars, we find a relatively broad range of disk masses (10-4-10-3 M⊙), scale heights, and flaring indices. Via a parametrization of dust stratification, we can reproduce the peak fluxes of the 10 μm emission feature observed with Spitzer/IRS, and find that disks around M-type stars may display signs of dust sedimentation. We discuss a tentative correlation between the strength of the 10 μm emission feature and the parametrized stratification.
Conclusions: The Herschel/PACS observations of low-mass stars in Cha-I provide new constraints on their disk properties, overall suggesting that disk parameters for early M-type stars are comparable to those for more massive stars (e.g., comparable scale height and flaring angles). However, regions of the disks emitting at about 100 μm may still be in the optically thick regime, preventing direct determination of disk masses. Thus the modeled disk masses should be considered as lower limits. Nevertheless, we are able to extend the wavelength coverage of SED models and start characterizing effects, such as dust sedimentation, an effort leading the way towards ALMA observations of these low-mass stars.

Herschel is an ESA space observatory with science instruments provided by European-led Principal Investigator consortia and with important participation from NASA.Tables 1, 2, and 5 are available in electronic form at http://www.aanda.org 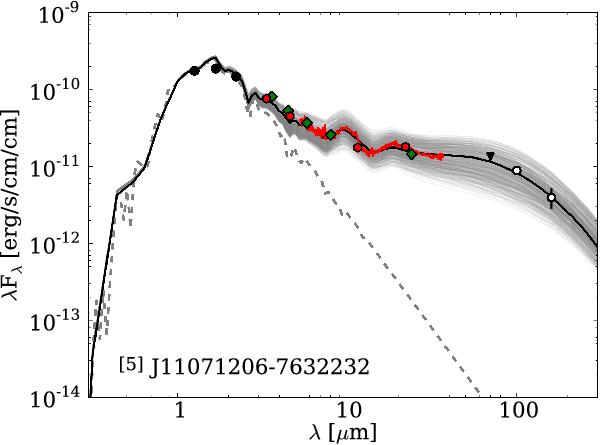