Context. Accurate determination of the redshifts of galaxies comes from the identification of key lines in their spectra. Large sky surveys, and the sheer volume of data they produce, have made it necessary to tackle this identification problem in an automated and reliable fashion. Current methods attempt to do this with careful modelling of the spectral lines and the continua, or by employing a flux/magnitude or a signal-to-noise cut to the dataset in order to obtain reliable redshift estimates for the majority of galaxies in the sample.
Aims: In this paper, we present the Darth Fader algorithm (denoised and automatic redshifts thresholded with a false detection rate), which is a new wavelet-based method for estimating redshifts of galaxy spectra. Automated, simple, and largely empirical, we highlight how the Darth Fader algorithm performs in the very low signal-to-noise regime, and demonstrate its effectiveness at removing catastrophic failures from the catalogue of redshift estimates.
Methods: We present a new, nonparametric method for estimating and removing the continuum in noisy data that requires no a priori information about the galaxy properties. This method employs wavelet filtering based on a tuneable false detection rate (FDR) threshold, which effectively removes the noise in the spectrum, and extracts features at different scales. After removal of the continuum, the galaxy spectra are then cross-correlated with the eigentemplates, and a standard χ2-minimisation used to determine the redshift of the spectrum. FDR filtering is applied to the spectra a second time to determine the number of spectral features in each galaxy spectrum, and those with fewer than six total features are removed from the catalogue as we are unlikely to obtain a reliable and correct estimate of the redshift of such spectra.
Results: Applying our wavelet-based cleaning algorithm on a simulated testing set, we can successfully build a clean catalogue including extremely low signal-to-noise data (S/N = 2.0), for which we are able to obtain a 5.1% catastrophic failure rate in the redshift estimates (compared with 34.5% prior to cleaning). We also show that for a catalogue with uniformly mixed signal-to-noise ratios between 1.0 and 20.0, with realistic pixel-dependent noise, it is possible to obtain redshifts with a catastrophic failure rate of 3.3% after cleaning (as compared to 22.7% before cleaning). Whilst we do not test this algorithm exhaustively on real data, we present a proof of concept of the applicability of this method to real data, showing that the wavelet filtering techniques perform well when applied to some typical spectra from the Sloan Digital Sky Survey archive.
Conclusions: The Darth Fader algorithm provides a robust method for extracting spectral features from very noisy spectra: spectra for which a reliable redshift cannot be measured are automatically identified and removed from the input data set. The resulting clean catalogue, although restricted in number, gives an extremely low rate of catastrophic failures, even when the spectra have a very low S/N. For very large sky surveys, this technique may offer a significant boost in the number of faint galaxies with accurately determined redshifts. 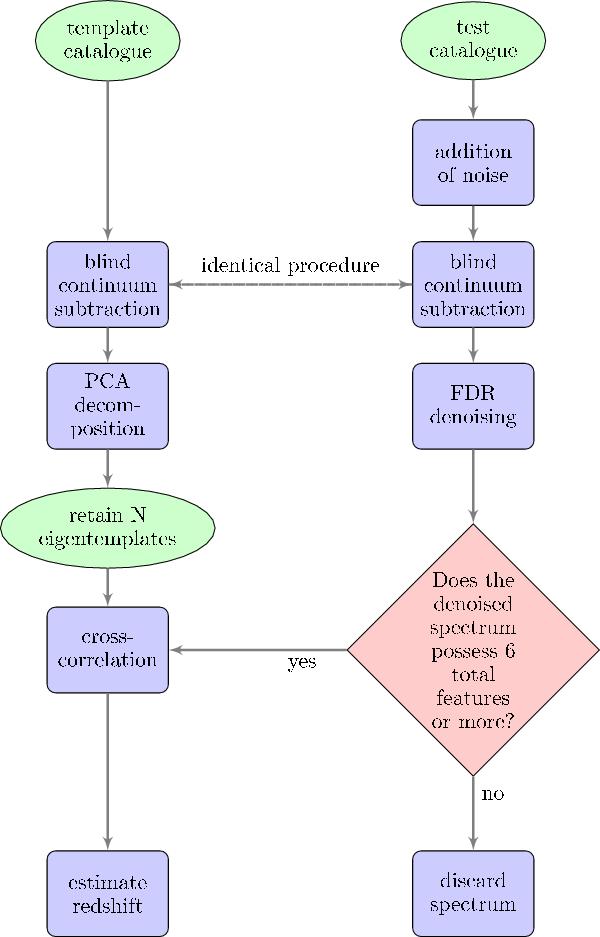