The IRAM-30 m line survey of the Horsehead PDR. IV. Comparative chemistry of H2CO and CH3OH

Context. Theoretical models and laboratory experiments show that CH3OH is efficiently formed on cold grain surfaces through the successive hydrogenation of CO, forming HCO and H2CO as intermediate species. In cold cores and low UV-field illumination photo-dissociation regions (PDRs) the ices can be released into the gas-phase through nonthermal processes such as photodesorption, which considerably increases their gas-phase abundances.
Aims: We investigate the dominant formation mechanism of H2CO and CH3OH in the Horsehead PDR and its associated dense core.
Methods: We performed deep integrations of several H2CO and CH3OH lines at two positions in the Horsehead, namely the PDR and dense core, with the IRAM-30 m telescope. In addition, we observed one H2CO higher-frequency line with the CSO telescope at both positions. We determined the H2CO and CH3OH column densities and abundances from the single-dish observations complemented with IRAM-PdBI high-angular resolution maps (6'') of both species. We compared the observed abundances with PDR models including either pure gas-phase chemistry or both gas-phase and grain surface chemistry.
Results: We derived CH3OH abundances relative to total number of hydrogen atoms of ~1.2 × 10-10 and ~2.3 × 10-10 in the PDR and dense-core positions, respectively. These abundances are similar to the inferred H2CO abundance in both positions (~2 × 10-10). We find an abundance ratio H2CO/CH3OH of ~2 in the PDR and ~1 in the dense core. Pure gas-phase models cannot reproduce the observed abundances of either H2CO or CH3OH at the PDR position. The two species are therefore formed on the surface of dust grains and are subsequently photodesorbed into the gas-phase at this position. At the dense core, on the other hand, photodesorption of ices is needed to explain the observed abundance of CH3OH, while a pure gas-phase model can reproduce the observed H2CO abundance. The high-resolution observations show that CH3OH is depleted onto grains at the dense core. CH3OH is thus present in an envelope around this position, while H2CO is present in both the envelope and the dense core itself.
Conclusions: Photodesorption is an efficient mechanism to release complex molecules in low-FUV-illuminated PDRs, where thermal desorption of ice mantles is ineffective. 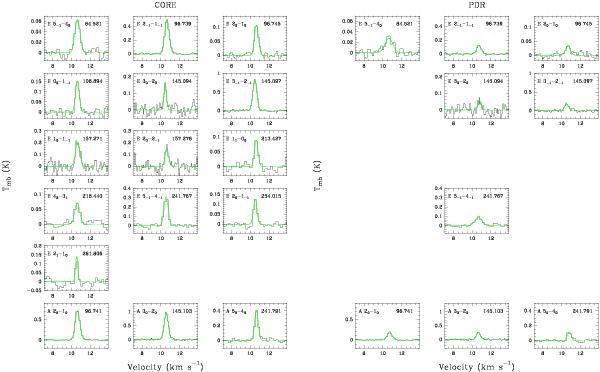